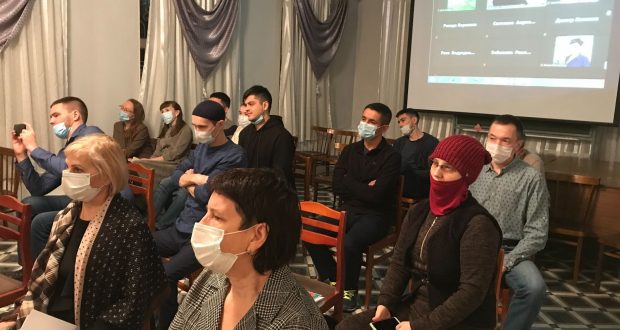 At the invitation of  Permanent Mission of the Republic of Tatarstan in the Sverdlovsk Region, ethnologist, Doctor of Historical Sciences, Professor Damir Iskhakov and political scientist Ruslan Aisin visited Yekaterinburg. The working trip of scientists lasted from 26 to 28 November.

During the working trip, the guests visited the Verkhne-Pyshminskaya mosque, the museum club House of the Agafurov merchants, the territory of the Tatar settlement project, the National-cultural autonomy of the Tatars of the Sverdlovsk region, met with  leaders of public organizations and representatives of active Tatar youth, and also got acquainted with the sights of the city of Yekaterinburg …

On November 27,  Permanent Mission of the Republic of Tatarstan in the Ural Region organized a round table “Towards “ Strategy for  Development of the Tatar Nation ”as part of the presentation of the collection of the same name. The main participants were some of the authors of the work – ethnologist, doctor of historical sciences, professor Damir Iskhakov and political scientist Ruslan Aisin, who came from the capital of Tatarstan.

The meeting was opened by  Permanent Representative of the Republic of Tatarstan Khaidar Gilfanov, having greeted the guests and participants,  Deputy Permanent Representative of the Republic of Tatarstan Favia Safiullina  became a moderator of the communication. The meeting was also attended by  Chairman of the Congress of Tatars of the Sverdlovsk Region Rinat Askarov, businessman and public figure Oleg Khabibullin, coordinator of the Tatar Sloboda project Ildar Khabibullin, representatives of the Tatar community and youth of Yekaterinburg. In the format of an online broadcast, the round table was watched by directors and teachers of schools with an ethnocultural (Tatar) component as part of the education of the Sverdlovsk region, Tatar social activists from distant territories. A live broadcast of the communication was conducted on the Instagram social network.

Guests from Kazan presented a 400-page collection “Towards the” Strategy for  Development of the Tatar Nation “, which is a collection of materials that appeared in the republican media in 2018-2019.

At the meeting,  historian, chairman of the Tobolsk national-cultural autonomy of the Tatars Zaytuna Tychinskikha   also spoke.  She spoke about the situation of the Siberian Tatars in the Tyumen region and other regions.

Speakers mainly built their reports around  history of the Tatars and their place in the modern world. We also talked about the prospects for the future development of the nation. The important topic of the upcoming population census in 2021 and problems related to demographic challenges, assimilation, mixed marriages and a separate problem of attempts to Bashkirization of Tatars were touched upon several times.

Experts supported efforts to preserve and popularize the material heritage of the Tatars and to promote the Tatar settlements both in Yekaterinburg and in other cities.

All topics aroused keen interest, and some of the statements caused discussion among the participants.

The round table ended with  conclusion that the future of the Tatars lies in continuous intellectual activity and education. The experts stated their opinion that the strategy for  development of the Tatars cannot be a one-time document, but should be a constant process of brainstorming and even philosophical reasoning.

At the end of the meeting, Damir Iskhakov called on the circles of the Tatar intelligentsia of Yekaterinburg to self-organize into groups of such thinkers, especially emphasizing the role of youth in this process. The participants agreed to continue  correspondence dialogue and did not disperse for a long time, exchanging views until late in the evening.