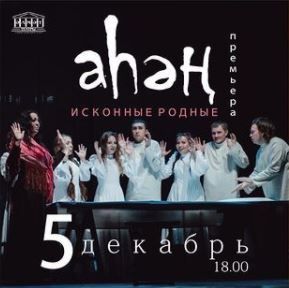 The basis of the project is  musical and poetic folklore of the Tatar people.

The performance is divided into several small and different scenes. Each one rests  on short stories reflecting many themes and painful issues: from the history of the Bulgarian state, the founding of Kazan, the devastating famine in the Volga region and repressions of the 30-40s to modern ethnic, linguistic and cultural problems. The creators call what is happening on stage a spectacle. This is probably the way it is: in each individual sketch, one can feel the “hand” of the master who worked on it. Everyone has brought something special, and therefore it is impossible to find a common genre to which the production can be attributed. There is drama, farce, art house, and even a show.

Mini-stories flow into one another through blurred boundaries, no clear logic can be traced, which gives rise to the feeling of a “kaleidoscope”: the “device” is slightly turned and now there is another pattern in front of your eyes with many new details – you just have to look at it. A two-hour action makes you experience a whole range of emotions, while the brain does not calm down even for a second, trying to sort what it saw on the shelves.

At   the “Ahen”, we tried to create a multi-component view,” says the artistic director of the project, Iskander Sakaev. – There are contradictions, many elements that are not related to each other, but they all reinforce each other. The work combines subtle things that, as a rule, are not noticeable in everyday life, a large thematic scattering: you can see historical moments and connection with modernity, human relationships, conflicts, issues of life and death. There are no main roles, but there are many small ones. The viewer becomes more than just an outsider. He is a  co-participant. And he will have to reach catharsis: both during viewing and afterwards, he will have to format everything, sort it out on the shelves. At the same time, one part of the audience may not like what others will praise, and vice versa.

Indeed, not all plots unfolding on the stage will be clear. Even if it seems that you have managed to catch the meaning by the tail, it can slip away thanks to unexpected turns or symbols, of which, by the way, there are quite a few. But what will definitely not leave anyone indifferent is the abundance of folklore. The choir humming national melodies, songs and lullabies is an active character. In addition, in the performance you will hear proverbs, poems, tales and legends. An unusual emotional effect is provided.

“You have no idea what impression I am under,” says Aliya Mukhamadeeva, who attended the premiere. – It’s even difficult to describe. Probably a lot needs to be comprehended. I will definitely say that I liked the story about “cyber-grandmothers”. If I understood correctly, the problem of the connection between generations is vividly presented here, the loss of traditional values ​​that cannot be created artificially: all that remains is not to forget our roots, to pass on culture “from mouth to mouth” through the centuries.

– And I was hooked by a story about a singer from Kazan, who travels through the villages and collects old folk songs. For me, this is a conflict between fathers and children, a combination of modern reality and what is becoming a thing of the past, ” Reseda Bilalova shared her emotions.