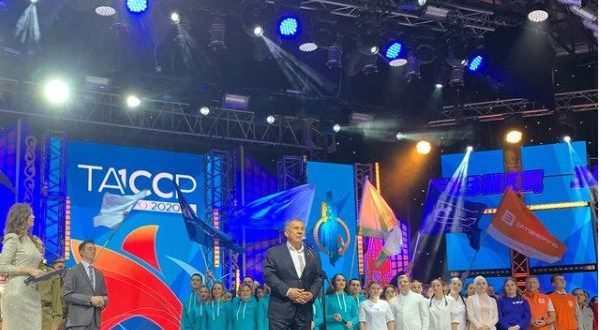 Gala concert of the festival “Our Time – Beznen Zaman”

On November 30, a gala concert of the VIII annual open republican television festival of creativity of working youth “Our time – Beznen zaman” was held. The Grand Prix of the festival has been  won by the Road Safety team from Kazan.

The gala concert began with a parade of festival participants and welcoming words from  President of the Republic of Tatarstan, Rustam Minnikhanov. “A lot of work has been done by the organization“ Constellation – Yoldyzlyk ”. It is very important that we have found such a form, thanks to which we involve our working youth in  creative process. Huge support is provided by  heads of enterprises, municipalities, trade unions. We see how much this project is in demand in Tatarstan. I congratulate everyone on this occasion. This festival and all its participants are a great asset of our republic, ” the President of the Republic of Tatarstan said. He also called on everyone to be attentive to  observance of preventive measures during the coronavirus pandemic.

Then Rustam Minnikhanov presented awards to the organizers of the creative festival, so  head of the festival “Constellation – Yoldyzlyk” Dmitry Tumanov received from the hands of the President of the Republic of Tatarstan the badge of distinction “For mentoring” on behalf of  President of the Russian Federation.

“We will continue to support this movement,” noted Rustam Minnikhanov. – We are proud of you. You are the golden fund of our republic, our future! ”

Following the speech by  President of the Republic of Tatarstan, a welcome letter from the executive secretary of the Commission of the Russian Federation for UNESCO Grigory Ordzhonikidze, addressed to the participants and organizers of the festival, was read from the stage.