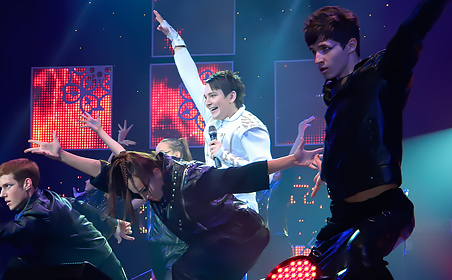 In the KRK “Pyramid”, a qualifying round of the II International TV Song Contest of Turkic world Turkvision-2014 (“Tyurkvidenie”) took place. The event was part of the “Kazan – the cultural capital of the Turkic world in 2014” program.

The jury had to choose out of 21 performers, who will represent Tatarstan in a semifinal. The jury consisted of the People’s Artist of Russia and Tatarstan Venera Ganieva, Deputy Director General TRC “New Century” Milyausha Aytuganova, People’s Artist of the Republic of Tatartsan Aidar Faizrakhmanov, general director of the magazine “Voice of Turkey” Hakan Solater and Honored Artist of the Republic of Tatarstan Milyausha Tamindarova.

It is worth noting that one of the conditions of “Tyurkvideniya” as “Eurovision” is the requirement that a participant performed the song in the competition for the first time and performed live. Likewise, before the singer appeared on stage, presenters told a little about his life and work, and at that time, on the screen, a video clip with the image of the artist was shown.

The first came on the scene the group “Alqanat”, who played a fiery rock composition. The audience supported musicians by a loud applause. A lot of lyrical songs sounded as well. They were performed by Albert Ismail, Ilvina Minnegalieva, Veronica Kuznetsova, the group “Bolgar Kyzlar”, Gulnaz Batalova and others. But the audience heard also a rhythmic contemporary music. Among its artists were Alina Davidova, performing with dance group, Ilgiz Shaikhraziev, Aidar Suleymanov with dance group ” Road from the city,” the group «Kazan world».

After his showing Aidar Suleymanov was very happy with his performance and was expecting to win. The singer works in Moscow and learned about the competition in Kazan quite late, he applied at the last moment. The song “Horses run” was written 10 days ago. Preparations took 5 days.

“I believe that a song-winner should be bright, dynamic, in the style of the Turkic spirit. We have managed to create something similar. We were preparing the item not for the narrow Tatar audience, but for representatives of the Turkic world in other countries “, – said the singer.

Another participant – Ilgiz Shaikhraziev told that he loves to take part in competitions. For him it is primarily a holiday, but

also an opportunity. The singer, a songwriter of “We are together.” It was written in March for another contest, which was to be held in Bosnia and Herzegovina, but did not happen, and the singer decided to preserve the composition for Turkvision. I. Shaikhraziev went to the competition with the desire to win, but on the day of presentation he had to fight off colds. In general, the artist was pleased with the performance.

As the band vocalist of «Kazan world» Almira Mirgayazova told, participation in the competition for her is a test, checking level of professionalism. Initially, the band applied for the competition with other song. But after the band received an invitation, they decided that the song is a non-competitive, and in a few days, the new song – “Waiting for you” was written. She noticed that her main purpose – participation in Turkvision, rather than victory.

By the end of the qualifying round, the winner became Aidar Suleimanov. He will participate in the semi-finals of the competition. We remind, semifinals and finals of the Turkic analogue of “Eurovision” will be held in Kazan, November 19 and 21.