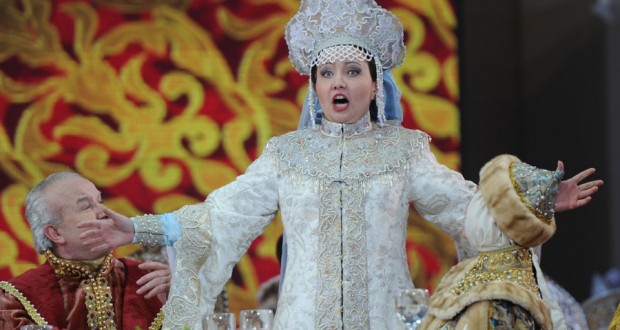 In late October, People’s Artist of Tatarstan , a soloist of M. Jalil TASTO&B Albina Shagimuratova performed at the New stage of Mariinsky Theatre (St. Petersburg) in the gala concert dedicated to the works of Mozart. The concert included arias and duets from the most popular opera composer in the performance of soloists and symphony orchestra conducted by Mikhail l Agrest.

“The autumn season is marked by Mozart» (Albina Shagimuratova’s autumn with Mozart) – the official website of the singer’s upcoming plans informs, including engagements at the State Opera of Bavaria (Munich) and the Metropolitan Opera (New York).

From November 14 to 27, Albina sings Queen of the Night in a series of performances ” The Magic Flute” at the Bavarian State Opera (directed by August Everding , conductor – maestro Ivor Bolton). At the end of December ( 16-26.12 ), lady singer is waited at the Metropolitan Opera – for Christmas, here the ” Magic Flute” is given also in a very unusual production by Julie Taymor.

Performances of Albina Shagimuratova are scheduled for February on the stage of the famous La Scala (Milan ). The singer will perform the title role in Donizetti ‘s opera ” Lucia di Lammermoor ,” in the playbill – 6 performances.

We remind that in 2012, for the role of Lucia di Lammermoor in cognominal production by M. Jalil Tatar Academic Opera and Ballet theatre, Albina Shagimuratova was awarded the Russian National Theatre Award “Golden Mask” .