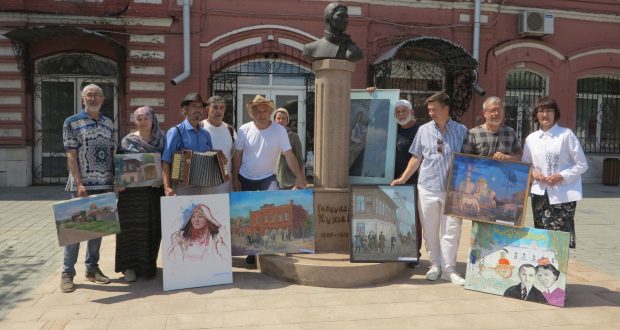 May 16, 2022 marks the 110th anniversary of the visit of the great Tatar poet Gabdulla Tukay to Troitsk.

The art plein air was attended by professional artists from different cities of Tatarstan (Kazan, Zelenodolsk, Yelabuga, Nab. Chelny), from Troitsk, Chelyabinsk. Among them are well-known artists: A. Krylov, I. Antonova, G. Anyutina, Kh. Sharipov, R. Mukhametdinov, A. Karapetyan and others.

Within the framework of this project, the Trinity Museum of Local Lore hosted a round table “Gabdulla Tukay’s Topoi in Contemporary Fine Arts: Traditions and Innovation” and a presentation of the three-volume edition “Gabdulla Tukay: Life and Creativity” (“Materials for the chronicle of the life and work of Gabdulla Tukay”, laureate of the competition ” Keyword” (2022), organized by the Federal Agency for Nationalities Affairs, in the nomination “Best Scientific Project”) with the participation of scientists from IYALI named after A.I. G. Ibragimova of the Academy of Sciences of the Republic of Tajikistan (Doctor of Art History R.R. Sultanova, Candidates of Philology M.I. Ibragimov, L.R. Nadyrshina), local historians (R.G. Gizatullin, I.R. Akhmedshin). The lecture of the honored worker of arts of the Republic of Tatarstan Kh. Sharipov about the Tatar art (Nab. Chelny) was held in the Centralized Library.

The plein air participants were presented with letters of thanks from the Head of the city of Troitsk and the Congress of Tatars of the Chelyabinsk region. The artists expressed gratitude to the city administration and the local history museum for the high organization of the plein air and the warm welcome. Each of the participants spoke about his painting, intended for transfer to the funds of the Trinity Museum of Local Lore.

Paintings and graphics created during the art plein air will be shown to the general public at the Gabdulla Tukay Literary Museum in September 2022.