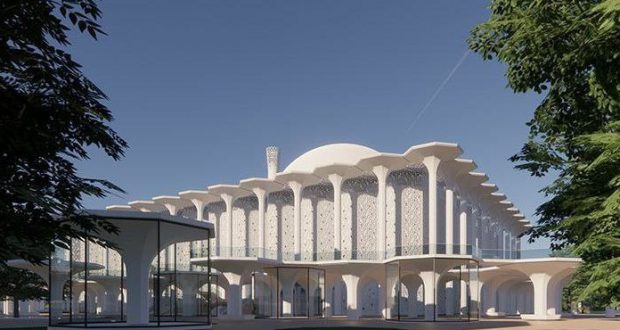 Photos of sketches of the Cathedral Mosque of Kazan appeared

Photos of sketches of the Cathedral Mosque of Kazan under the Ak Bakhcha project appeared on the net. The authors of the concept are the Moscow bureau Ginzburg Architects.

This project is a park with a grove of symbolic trees, which are a reference to the rich nature of Tatarstan. The mosque itself will be presented as a community center with a hotel for pilgrims.

It is known that parking will be located on the first level, public places on the second, and the main hall of the mosque with balconies, a mihrab and a minbar on the third.

Earlier, KazanFirst wrote that President of Tatarstan Rustam Minnikhanov approved the best project for the Cathedral Mosque of Kazan. A large-scale competition for the appearance of a cult object, which will become the main symbol of the celebration of the 1100th anniversary of the adoption of Islam by the Volga Bulgaria, has ended in the capital of Tatarstan.