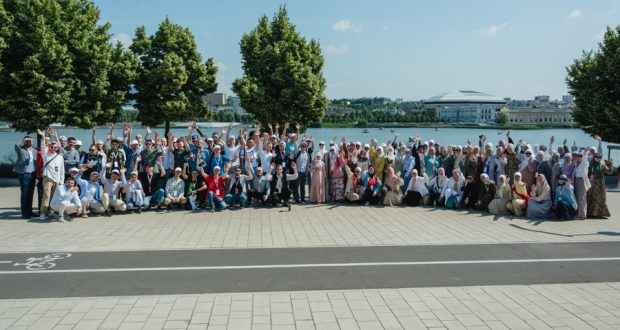 July 23), the XIV All-Russian Forum of Muslim Youth, dedicated to the 1100th anniversary of the adoption of Islam in the Volga Bulgaria, started in Kazan. Mufti of Tatarstan Kamil hazrat Samigullin took part in the grand opening, which took place at the residence of the Spiritual Muslim Board of the Republic of Tatarstan, and gave his instructions to the youth. He urged to value youth until old age came. According to him, young people are pushing the dunya forward. And the qyibadat of a young man is considered higher and more valuable than the qyibadat of an old man. Kamil hazrat, having designated youth as a resource, cited as an example theologians who, being young, worked very productively – these are Gabdennasyr Kursavi and Imam Suyuti – they were only 21 years old when they wrote their outstanding works. The mufti also mentioned the young sahab Zeid ibn Thabit, who at that age was elected by the authoritative companions of Muhammad ﷺ as the chairman of a special commission and took an active part in compiling the complete written text of the Qur’an.

At the opening ceremony, Deputy Mufti for Education, Chairman of the Council for Islamic Education of Russia, Rector of the Russian Institute of Islamic Studies and KIU Rafik Hazrat Mukhametshin, Head of the Department for Cooperation with Public Organizations of the Executive Committee of Kazan Ilnur Shakirov, Candidate of Economic Sciences, business coach of Ak Bars Corporate University Bank, trainer-expert in the development of soft skills of the University of Talents, grantwriter of the Chistopol Muhtasibat Alfiya Zabbarova, head of the social development department of the Spiritual Muslim Board of the Republic of Tatarstan Aigul Biktimirova.

Hazrat Rafik Mukhametshin noted that the current forum is held under the motto “Without interrupting history”, and the fact of the 1100th anniversary of the adoption of Islam by the Volga Bulgaria should arouse interest in history. He urged the forum participants to follow the traditional values ​​that were passed down from generation to generation from our theologians and ancestors. “What has been done by our theologians is the basis for preserving our traditions,” said Hazrat Rafik.

Alfiya Zabbarova, grantee of the Chistopol Muhtasibat, noting that our global goal in life is the pleasure of Allah, indicated the shortest path in this direction – these are social projects, the “packaging” of which will be done by the members of the forum. In her opinion, Allah gives numerous opportunities, and the forum itself and projects are the things that can change everyone’s life. At the forum, Alfiya Zabbarova will share the valuable experience she has gained over the course of several years.

The 1100th Anniversary Forum itself will be held in Bolgar on July 23-31 in the format of a tent city. About 150 young men and women from foreign countries, such as Kazakhstan and Egypt, from regions of Russia, such as Tatarstan, Moscow and the Moscow region, Orenburg, Yekaterinburg, Tobolsk and Cheboksary, Kemerovo, Penza, Chelyabinsk regions, from the cities of Samara, Novosibirsk, Volgograd, Izhevsk, Perm, Ufa, Chelyabinsk, Pervouralsk, etc.

The organizers of the Forum are the Spiritual Board of Muslims of the Republic of Tatarstan together with the Foundation for the Support of Islamic Culture, Science and Education. Considering the fact that the Forum is dedicated to the 1100th anniversary of the adoption of Islam, much attention is paid to the historical and religious component. The program of the Forum consists of three blocks: historical, religious and design.

The main goal of the Forum is to convey to the participants the values ​​of the history and culture of the peoples of the Volga Bulgaria through scientific and educational lectures on the history of Islam in the Volga region and Russia, through excursions to the protected area of ​​the Bulgar land. The main objectives of the forum are: expansion and deepening of knowledge about the history of Islam in Russia and the Volga region; creation of the necessary conditions for the personal, creative, spiritual and moral development of young people; preservation and promotion of health; inculcation of universal culture and spiritual values ​​through knowledge of new historical facts about the life of ancestors; involvement in tourism, local history and other activities.