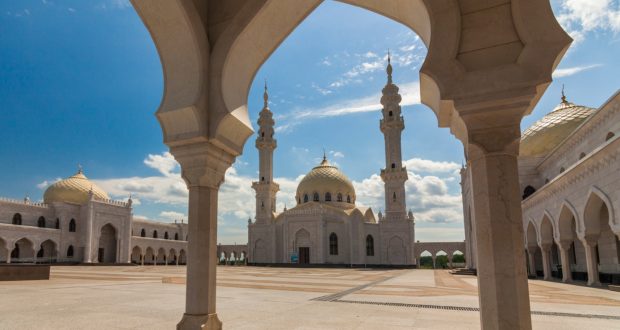 On July 6, the exhibition hall of the Museum of the History of Sviyazhsk hosted the opening of the interregional exhibition “Volga Bulgars on the Sviyaga: material and spiritual traces of a great era”, dedicated to the history of the Tatar population of the Volga-Sviyazhsk interfluve, starting from the era of the Volga Bulgaria (VIII-X centuries) and before XX century. The exhibition is dedicated to the year of the 1100th anniversary of the adoption of Islam in the Volga Bulgaria.

The exhibition is part of the exposition and research project of the Museum-Reserve “Island-city of Sviyazhsk” “Sviyazhsk ethnoworlds”, aimed at presenting the ethnic diversity of the former Sviyazhsk district, the Volga-Sviyazhsk region. The cycle was launched in 2017, it included the exhibitions Sviyaga – Flowing Water, Mordovians, Maris and Chuvashs in the History and Culture of the Sviyazhsky Region, Sviyazh Ethnoworlds. Russians.

The region in which Sviyazhsk is located, the natural and geographical territory of the Volga region, has been mastered by people since ancient times. Active processes associated with the Tatar population, which left deep traces in the history of the region, formed the modern ethnic picture and the main network of settlements, took place here in the Middle Ages, at the historical stages of the Volga Bulgaria (X-XIII centuries), the Golden Horde (XIII-XV centuries) Kazan Khanate (XV-XVI centuries), Russian state (XVI-XVII centuries).

The exposition consists of several thematic sections: “Archaeological monuments of the Bulgar era in the territory of the Volga region”, “Medieval epigraphic monuments of the region”, “History and ethnography of the Tatar population of the Volga-Sviyazh interfluve of the 18th – early 20th centuries”, “Remarkable natives of the Sviyazhsky region: Kayum Nasyri , Sh.A. and F.Sh.Tagirovs”, “Archaeological and historical researches of XIX-XX centuries”.

The exhibition presents more than 300 exhibits, including: medieval archaeological artifacts; ethnographic objects of the 19th – early 20th centuries, reflecting the life, occupations and crafts of the Tatar rural population, women’s costume and its attributes; documentary sources of the 17th-18th centuries, memorial materials of the scientist-educator Kayum Nasyri, rare book editions; modern photographs of the Bulgar settlements and medieval tombstones, made during the research of the historical and archaeological project “Country of Cities” and as part of the preparation of this exhibition. The archaeological and ethnographic materials of the exhibition are of an interregional nature, covering the territories of Tatarstan, the Ulyanovsk region, and the Chuvash Republic.

Venue: Exhibition Hall of the Museum of the History of Sviyazhsk (building 4).