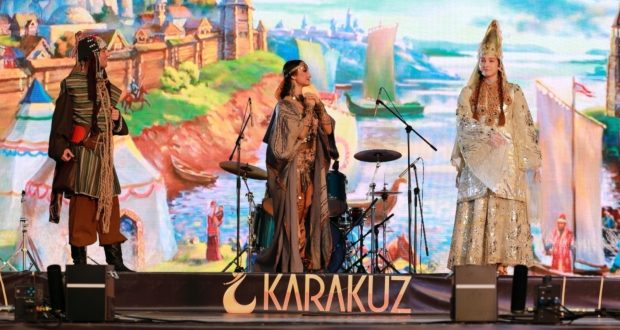 The Company and its TATNEFT Charitable Foundation are holding the Karakuz ethno-cultural festival from July 15 to August 28.

The main part of the program will take place in Almetyevsk at 15 city sites, and several more activities will be held in Nizhnekamsk, Bugulma, Aznakayevo and Leninogorsk. Festival events will take place every Friday, Saturday and Sunday. Entrance to open areas is free.

The organization of the ethno-festival is becoming a good tradition for Tatneft and its Charitable Foundation; for the second year in a row, Almetyevsk is turning into a multicultural center of Tatarstan. Thus, the Company preserves, unites and strengthens the traditions of the multinational people of the republic.

The festival will open on an ethnic platform, where will work: ethnomarket (exhibition and sale of tools, household items and jewelry with a national component); master classes in folk craft (blacksmithing, pottery workshop); on the basics of playing the ancient Volga instruments; – 10 mini playgrounds with Turkic folk games and amusements; food court with Turkic flavor (spelt, horsemeat, koumiss);

The concert program of the folk scene on the subject of Turkic culture includes performances by groups performing traditional folk and works in modern processing. Khmelnaya Vorga, ABIEM Project, ZAKARIA, Merema, Uzoritsa, Kadim Almet and others will appear on the stage.

The guests will be presented with the best dance performances and plastic performances from the organizers of the festival of modern choreography “Air”. For professional dancers, master classes will be held by the best choreographers and winners of well-known dance projects, including the Dancing show on TNT.

Painting workshops, book club talks, and an animation festival will be held at separate venues, where viewers will take part in master classes and interactive programs, create their own cartoons: from idea and dubbing to premiere on the big screen of the festival.

The festival of street culture “Freedom” will hold competitions in skateboarding and BMX with cash prizes. There will also be a break-dance festival “Sunshine Jam” – vinyl DJs will create the rhythm and mood, and the dancers will pump the circle and fight for the title of the best. The bright moment will be the performance of Antokha MS.

Also, the organizers have provided a platform for the gastrofestival, where you can taste delicious author’s national dishes from famous restaurants and participate in master classes of famous chefs.

A completely new platform for the festival will be “Comic Weekend”. Almetyevsk will turn into the capital of comedy. Stas Starovoitov, Sergey Zorik, Denis Gvozdev, Mikhail Kukota and Igor Chekhov, Konstantin Butakov, Lev Eremenko, the Sytye team, the Minsk team, Maxim Zayats, Sergey Gorokh will make you laugh. Performances with a limited number of seats, admission by tickets.

At the end of the Humorous Weekend, the KVN festival for the Tatneft Cup will take place. The special guest of the festival is the KVN team “Soyuz”