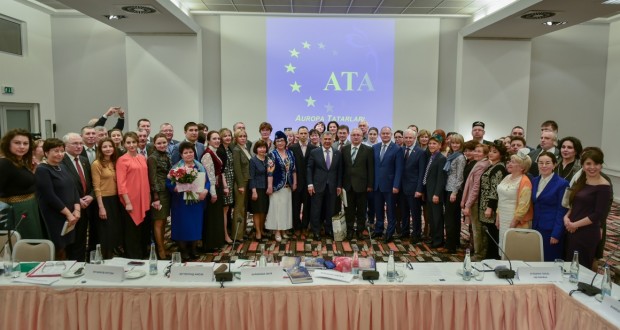 April 7, afternoon, an enlarged board meeting of “European Alliance of Tatars” continued its work. During the day, the meeting was chaired by the Alliance chairman Flyur Sharipov. At the second half of the meeting were present: Rita Khasanova from Hungary, Rustem Khusainov from Netherlands, Guzel Agishina from France, Fauzia Khadiullina from Estonia, Rafael Muksinov from Lithuania, Bari Dianov from Germany. In their speeches they touched on a wide range of issues on preservation and development of Tatar culture among compatriots in the European Union, the role of the media in the Tatar ethno-cultural unity “evrotatars”, international relations, etc.

There were also presentations by director of the Institute of the History after Sh. Marjani of RT AS Rafael Khakimov, representative of Fund of assistance to compatriots living abroad Vyacheslav Elagin, deputy director center “Selet” Aigul Gabdrakhmanova.

At the meeting, the proposals to Coordination Council under the President on Relations with compatriots were announced. This is organization of the club of Tatar businessmen, issuing of application on Eurasian Studies and more.

The activist from Monaco Reseda Akhmerova presented the site “European Alliance of Tatars.”

After a detailed exchange of views, a final resolution was adopted.