Home / News / At  the DUM (Religious   Borad  of  Muslims)  RT,  work  has began   on  preparing  an audio version of the tafsir Koran in the Tatar language 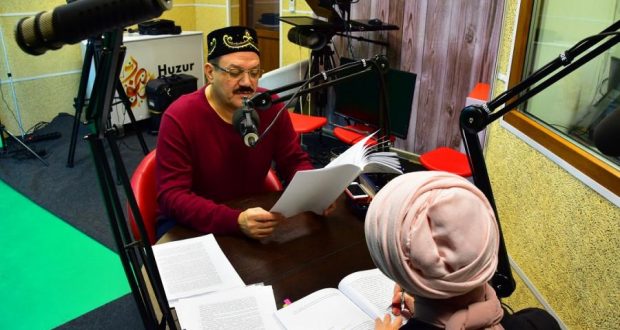 At  the DUM (Religious   Borad  of  Muslims)  RT,  work  has began   on  preparing  an audio version of the tafsir Koran in the Tatar language

The Publishing House “Khuzur” DUM RT   has began work on an audio version of the translation of the meanings of the Koran in the Tatar language, prepared by the Muftiat of Tatarstan. The text is voiced by the famous TV presenter Ildar Kiyamov. In total, a creative team of 5 specialists works on the project, including a consultant –  head of the Shariah department of the DUM of the RT, the Koran-hafiz Bulat Hazrat Mubarakov.

Currently, the creative group is writing down the text of the translation of the 48th surah of the Holy Quran (“Al Fatah”). In parallel with this is  processing, editing and editing of records. Until the end of 2019, declared in Tatarstan as the Year of Interpretation of the Qur’an – Tсfsir ela, the work is planned to be completed and audio discs will be released.

We remind  on the day of Eid al-Adha, the Mufti of Tatarstan Kamil Hazrat Samigullin presented the President of the Republic of Tatarstan Rustam Minnikhanov with a signal copy of the translation of the meanings of the Qur’an in the Tatar language, published by the DUM of the RT at the Khuzur Publishing House.

Fundamental work is the first in the history of the DUM RT to translate the meanings of the Koran, which will be published as part of the Year of the Interpretation of the Koran in Tatarstan. Positive conclusions about the text of translation of the meanings of the Qur’an from the DUM of RT were received from muftis, authors of other tafsirs, linguists, literary scholars, Islamic scholars, religious departments of Muslims and public organizations of Tatarstan and Russia.