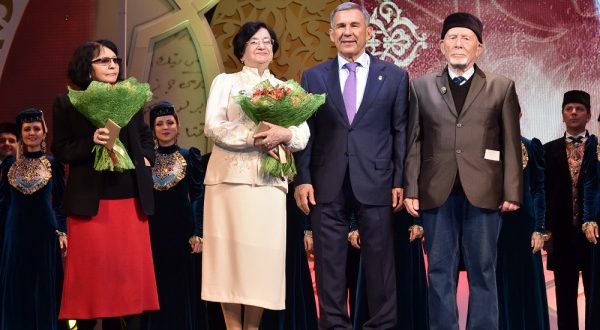 Head of the republic wholeheartedly congratulated those present on the holiday of their Native language and Tukay’s birthday. “April 26 has become a good tradition to celebrate the birthday of Tukay and hold a holiday of the Native language in Tatarstan, to us on this day  high guests  come. Today we award the Tukay Prize and continue this tradition, “said the President of the Republic of Tatarstan.

The writer Madina Malikova received a prize for the book “Arysh tme: novel, story, hatirulir” (Kazan: Ikhlas LLC, 2014). Receiving the award from the hands of the President of Tatarstan, she said that her first book turned 50 this year. “I devoted my whole life to literary creation. I take this gift as a sign of great respect for Tatar literature, and I hope that a status of the Tatar writer will always remain high, “the laureate said.

Haris Salikov was rewarded for his books: “Secular and spiritual motives in the works of A. Pushkin, G. Tukai and the problems of moral education today” (Kazan: Idel-Press Publishing House, 2008); “Religion and Science (the Basics of World Religious and Secular Cultures)” (Kazan: “Idel-Press” Publishing House, 2012). “I am 90 years old. And I wrote my first book 50 years ago. I dedicated my life to religious science, “said  Imam.

Rosalina Shageeva received an award for the book “Roses of Eternity: a collection of articles in the Tatar and Russian languages” (Kazan: Zaman Publishing House, 2015) about the national cultural heritage of Tatarstan. She thanked the leadership of the republic and the public for their high confidence. “But more than all awards – Motherland, native language, poetry,” she said.

The awarding ceremony was continued by a concert of masters of arts of Tatarstan, dedicated to the Day of Mother tongue and the 131 anniversary of the outstanding Tatar poet Gabdulla Tukai.

We  remind that  the State Prize of the Republic of Tatarstan named after  Gabdulla Tukai is being  awarded since 1958. It is awarded for the most outstanding works of literature and art (pictorial, musical, theatrical, circus, cinema, architecture and town planning) for the most outstanding, having received public recognition, which made a significant contribution to the development of national  culture.