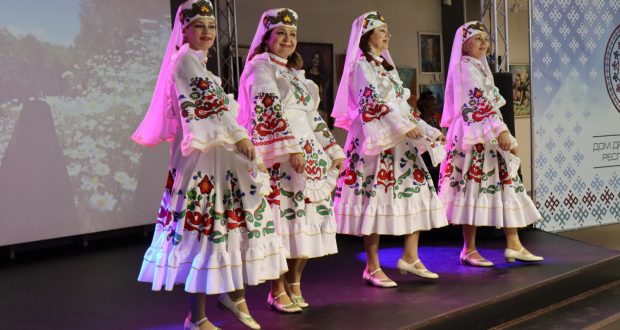 At the House of Friendship of the Peoples of the Komi Republic, the concert “With Love for  Motherland”, organized by the national-cultural autonomy of the Tatars, took place.

Director of the House of Friendship of Peoples Grigory Khatanzeisky and Deputy Minister of National Policy Vyacheslav Popov greeted the guests with welcoming words and wished that all peoples living in the territory of the Komi Republic live in peace and harmony.

The  concert was opened by  Honored Artist of Russia and People’s Artist of the Komi Republic Alfiya Korotaeva, who won the hearts of all the guests with her voice.

The ensemble of the Tatar-Bashkir song “Bulgar”   and the choreographic group “Agidel” from Usinsk   pleasedand surprised. Ttheir repertoire  included  folk and pop vocal and choreographic numbers that have remained in memory for a long time. The Ukhta choreographic ensemble “Aisylu” and the vocal ensemble “Duslyk” of the national-cultural autonomy of the Tatars and Bashkirs “Berdemlek” also performed on the stage.  They  spoke with great warmth and love about their people through song and dance.

Among the spectators were foreign students of the Syktyvkar State University named after Pitirim Sorokin, who for the first time were able to get in touch with the Tatar culture. Beautiful national costumes of the artists, their bewitching voices, original music – all this did not leave the audience indifferent, because not every day you see such a bright show!