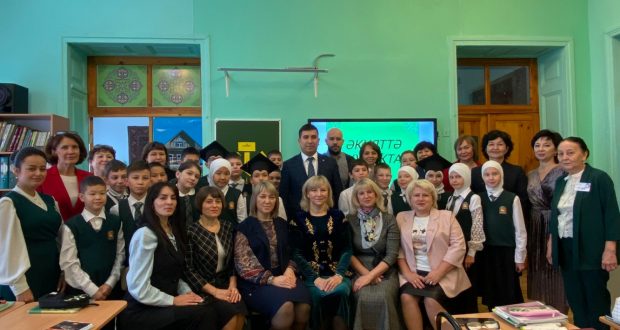 Danis Shakirov got acquainted with the Tatar gymnasium in Saratov

The head of the Executive Committee of the World Congress of the Tatars Danis Shakirov is on a working trip to Saratov. On October 14-15, a seminar-meeting for teachers of the Tatar language and literature “Development of ethno-cultural education in the Saratov region: state, problems and prospects” is being held here.

During the seminar, the guests got acquainted with the National (Tatar) Gymnasium named after Hero of the Soviet Union G.Ramayev. Moreover, they attended classes on national wrestling “korash” and visited the museum “Tatars of the Saratov Volga region”. Also, the participants of the event were presented with a production of the school Tatar theater “Nur” (“Tuga tel achkychy”).

A solemn event dedicated to the 30th anniversary of the National (Tatar) Gymnasium named after Hero of the Soviet Union G.G.Ramayev is planned at the school tomorrow.