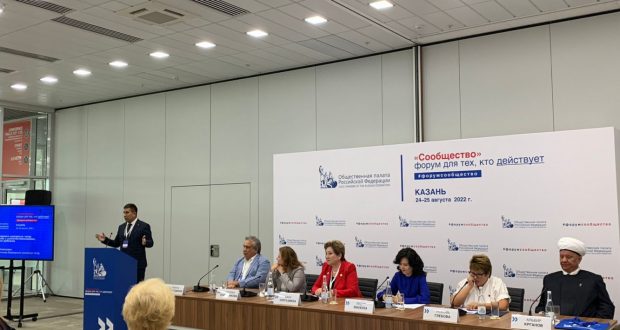 Today, the third regional forum “Community” has opened at the site of the Kazan Expo International Exhibition Center, which has been held annually by the Civic Chamber of the Russian Federation since 2015. This is an open working platform for a tripartite dialogue between society , business and government. The topic of the forum is “Russia: Diversity of Cultures, Unity of Citizens”.

As the head of the Executive Committee noted, today the World Congress of Tatars carries out international coordination of the modern life of the Tatar people and units 510 organizations: 147 organizations in 45 countries of near and far abroad, 378 in 76 regions of the Russian Federation and 45 in the Republic of Tatarstan.

“Based on the high assessment of the Minister of Foreign Affairs of Russia Sergey Viktorovich Lavrov on the activities of the World Congress of Tatars, as one of the important tools of soft power to promote the interests of compatriots of all the peoples of the Russian Federation in foreign countries, the Executive Committee of the World Congress of Tatars in its activities attaches particular importance to working with different categories of the Tatar population living in foreign countries, using various forms of work with them,” said Danis Shakirov.