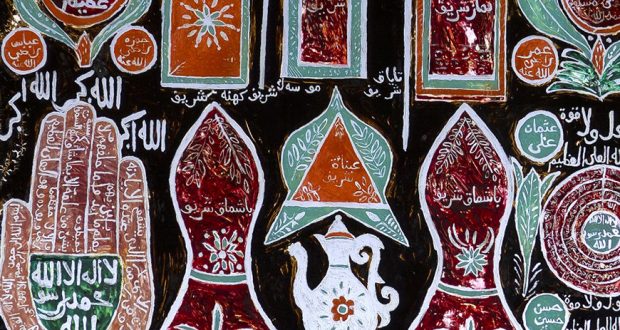 On July 28, in the Gallery of Modern Art of the State Museum of Fine Arts of the Republic of Tatarstan, the second festival of Islamic art “Shamail-art” will open, timed to coincide with the celebration of the 1100th anniversary of the adoption of Islam by the Volga Bulgaria. Expositions with works by 32 artists and craftsmen will occupy all three floors of the gallery.

The first project within the festival – “Traditions and Innovations” – will combine modern Arabic-graphic art, calligraphy, shamail from the collection of the Pushkin Museum of the Republic of Tatarstan and from the property of the artists participating in the festival.

An important place in the overall exposition is given to the collection of printed shamails of the early 20th century from the Marjani Foundation (Moscow) and the museum collection of shamails of folk craftsmen of the last century, made on glass. Among them, a wide range of viewers will be presented with a unique collection of folk master Bikmuratov Gabdelkhak hazrat (Shali village of the Republic of Tatarstan, 1927–2015), preserved in private collections (about 10 shamails). This project was called “In the beginning was the word”

Within the framework of the festival, the Fadlan Way project is being implemented – an exhibition of works by the Honored Artist of the Republics of Bashkortostan and Tatarstan Rinat Minnibaev (collection of the Marjani Foundation, Moscow), dedicated to the Turkic theme. Also, for the first time in Kazan, a unique video project “The Way to God” from the well-known Russian anthropologist Igor Pankov from St. Petersburg, director of the Al Maqam Foundation for the Development of Scientific and Cultural Projects, will be shown.

The opening ceremony of the Islamic Art Festival will take place at 17:00. On this day until 18:00 admission is free for everyone.

You can visit the expositions of the festival until September 25, the press service of the State Museum of Fine Arts of the Republic of Tatarstan reports.

Recall that the first festival of Islamic art was held in 2021 at the Khazine Gallery of the Pushkin Museum of the Republic of Tatarstan.