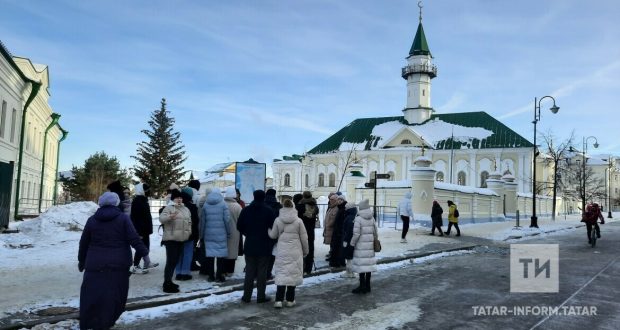 On the occasion of the anniversary of the Tatar theologian, educator Shigabutdin Marjani, Gabdulla Tukay Literary Museum in Kazan organized walking tours to the places associated with him in the Old Tatar Sloboda.

The route includes the former Tatar Teachers’ School, Yunusovskaya Square, the Gubaidullin House, the Al-Marjani Mosque, the Mukhammadia and Marjani Madrasahs, as well as the house where the scientist lived. The history of these objects is introduced by the senior researcher of the museum Lena Tyabina.

Tours will run until the end of January on the basis of applications. The majority of applicants are students and high school students. The date is determined upon request.

One of the memorable places associated with the name of Marjani is the building of the Medical and Pharmaceutical College of KSMU. At the end of the 19th century, the Tatar teacher’s school was located here. Marjani taught there, but due to the negative attitude of the Muslim clergy, he was forced to leave the institution.

“At that time, conservative Tatar mullahs were against teaching the Russian language, and Marjani advocated that the Tatars, living in Russia, be required to speak Russian, in which all state laws are published,” said Lena Tyabina.

Alina Nakipova, a student at the Medical and Pharmaceutical College, shared that she liked the tour and learned a lot of interesting information. “I studied at the 2nd Tatar gymnasium named after Shigabutdin Marjani, so I know a lot about him. During the tour, I discovered new facts,” said the student.