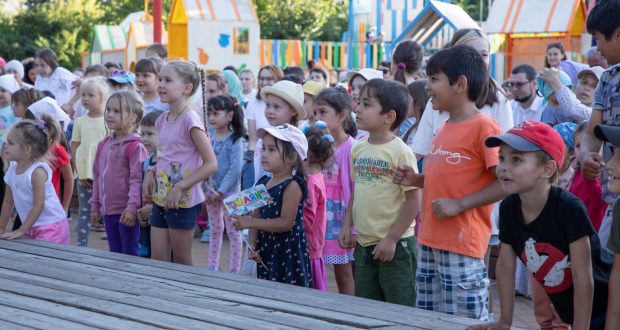 On August 19, in the children’s park “Kaleidoscope” there was an exercise for children called “SHAYAN Tizzaryadka”. The event was organized by the City Hall of Kazan together with the channel “SHAYAN TV” within the framework of the project “Khәrәkәttә – bәrәkat”, which is being implemented in parks and public gardens of the city. It should be noted that this is the eighth event this year within the framework of the project.

Children, together with the hosts of the SHAYAN TV channel, performed exercises, participated in flash mobs to the music. Everyone could take a picture with the main characters of the channel – Shayan and Miyau.

“We are watching the project of the Kazan City Hall “Khәrәkәttә – bәrәkәt”. We wanted to join him because we wanted to organize an event specifically for children. We work for them and are very glad that today we were able to communicate with children, get closer to them even more and spend time very productively and cheerfully under the motto “Life is in motion,” said Adilya Biktimirova, head of the PR department of the SHAYAN TV channel. .

At the event, active children and their parents received memorable gifts.

“We came to this event knowing about it in advance, and we really liked it. Both our daughter and I received memorable gifts. Such events are necessary to unite children and preserve the Tatar language. Many families do not speak Tatar, and during such holidays the language is given special attention,” said the mother of one of the participants in the exercise, Razilya Muginova.

Recall that in Kazan, the events of summer sports and creative activities of the project “Khәrәkәttә – bәrәkәt” started in 2021. Last year, 14 master classes were held. This year, master classes have already been held on the Tatar dance “Yarmak vagy”, tap dancing, aerobics, Tatar folk dance, the music and dance game “Zalida” and “Batyr Battle”.

Events “Khәrәkәttә – bәrәkat” are held by the Mayor’s Office of Kazan together with the Directorate of Parks and Public Gardens of the city from June to September.