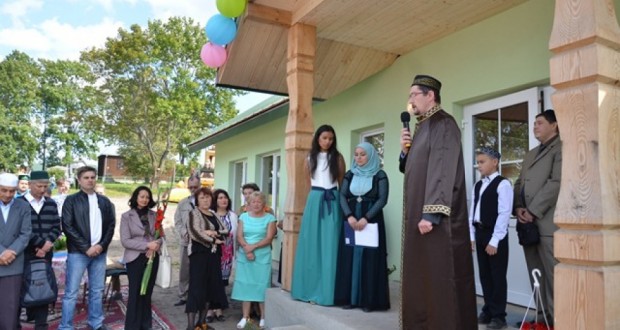 On Saturday, September 6, the villagers of Sorok Tatar organized a ceremony to mark the opening and consecration of the House of the Tatar community. The building, was sanctified by lines from the Koran by Mufti of muftiat of Muslims Lithuania Romas Jakubauskas and the imam of the local mosque Ramazanas Krinitskis.

House of Tatar community village Sorok Tatar was built according initiated by a group of local activities of Vilnius region program to improve the quality of life in rural areas, sponsored by the EU.

Financial assistance provided the Vilnius region municipality and completion was financed by the Turkish Embassy in Lithuania. The author of the project of the building – architect Silvestras Shimas. Establishing a center for cultural activities was planned long ago. Most of all, the implementation of the idea has been made by Tatar community, led by Fatima Buinovska.

Tatar village – the village Sorok Tatar – in Vilnius region appeared more than 600 years ago. Lithuanian Grand Duke Vytautas settled Tatars here, captured at the Battle of the Black Sea. Ruler allowed them to settle in Lithuania with their families, and in this corner of the Vilnius region, as the name suggests, probably got 40 of them, while another version says that the name is derived from -four Tatar captains of cavalry : Sobol, Bajrash, Tigush, Lashkuta , whose wife gave birth to 40 sons together. Today, the village is home to about 480 people, 115 of them – the Tatars.

The Muslim community of the village mosque Sorok Tatar counts about 320 believers. Many of them – live in different parts of Lithuania, but their family roots come from this village.