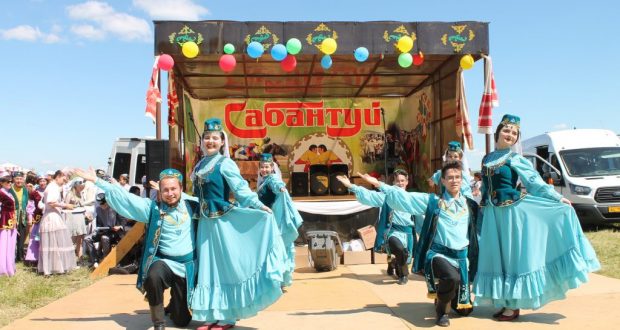 On June 25, the long-awaited Sabantuy holiday for all residents of the village of Mochaleevka, Pokhvistnevsky district, took place. This year it was the 40th anniversary event, which was attended by about five thousand residents and guests.

Horse races have been going on since morning. The participants of the village of Asekeyevo, Orenburg region, took part in the race. Chelno-Vershiny and with. Erzovka, Kinel-Cherkassky district.

At the same time, the team championship of the Samara region in Russian drafts named after Gubdulla Tukay and an international friendly match between drafts players of our region, the DPR and the Republic of Azerbaijan were held.

This year 21 teams from different parts of our region took part in the Championship. As a result of the game, each team was awarded cash prizes, medals and certificates to the winners. In an international friendly match, in memory of the friendship of peoples, publications of the World Congress of Tatars “Tatar World” and “Tatar National Cuisine” were presented.

– There has never been such a number of drafts players in Mochaleevka. It is very important. The hospitable land of Pokhvistnev received everyone. I wish you all victory! – Igor Stankevich greeted the participants.

Oleg Dashkov noted the uniqueness of this event, since in Russia games in the bosom of nature, in the open air, are extremely rare, mostly only indoors. For the first time, a large-scale away championship was held in the Republic of Sakha (Yakutia) in 2021, and now on Samara land in the village of Mochaleevka.