Home / News / in Moscow, the National Museum organized a special exhibition in the lobby of the Moscow International House of Music, 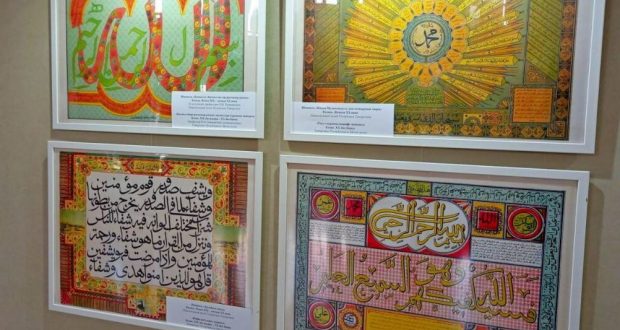 in Moscow, the National Museum organized a special exhibition in the lobby of the Moscow International House of Music,

On August 25, as part of the Days of Culture of the Republic of Tatarstan in Moscow, the National Museum organized a special exhibition in the lobby of the Moscow International House of Music, where the final gala concert was held. Presented are 10 unique shamails from the museum’s collection.

There are 150 shamails in the collection of the National Museum – from the end of the 19th century to our time. The exhibition presents some of the most valuable shamails from the beginning of the 20th century from the collection of Kazan University professor Nikolai Katanov and Kazan Theological Academy professor Ivan Pokrovsky. These are the works of calligraphy masters Mukhamedzhan Khodjaseidov and the Akhmedov brothers – Gabdelvali and Muhammadgali.

The presented shamails were printed in two leading printing houses of Kazan in a lithographic way. This is a private type-chromolithography owned by the merchant family of the Varaksins and a printing house of Kazan University. Among them, the shamail “Antiquities of Bulgaria” is of particular interest in the context of the Year of Folk Art and Intangible Cultural Heritage. Even then, the remains of the ancient city were treated with special trepidation and the genre of religious art was used to perpetuate the heritage.