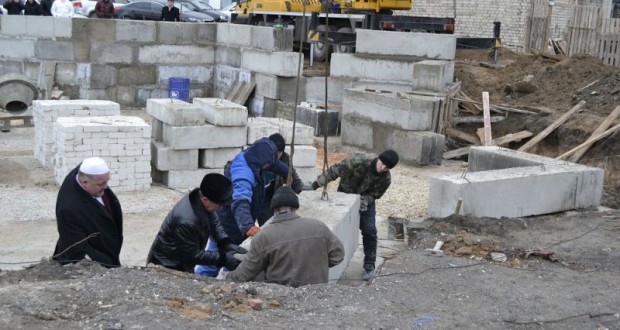 November 16, in Syzran, on Dekabrist street, the symbolic laying of the “first stone” at the construction site of the new mosque took place.

The ceremony was attended by the Mufti of the Samara region, chairman RDUMSO Talip Hazrat Yarullin, head of Syzran Nicholai Lyadin and local deputies of the Duma. The guest of honor of the event was the Mufti of Chelyabinsk and Kurgan regions Rinat Rayev.

Speakers in their welcoming remarks, said that the new Muslim temple should strengthen the friendship between Muslims and Orthodox in Syzran. They also thanked the city government for their assistance in the preparation of construction. Thanks sounded addressed the congregation, having made a donation for the construction of the temple.

In Syzran, there are approximately 16,000 Muslims and three mosques. The oldest of them is located just 50 meters from the construction site of a new temple. According to Muslim holidays old mosque no longer accommodated all the parishioners.

New Mosque will be in the form of an octahedron with two 28-meter minaret, with a large dome and four mini minarets mini. On the tops of the mosque there will be seven crescents. New abode designed for 500 people and externally will resemble the famous Kazan Kul-Sharif.

Funds for the construction is planned to raise through private donations. Total, about 13 million rubles is needed.

After the ceremony the guests went to the nearby old mosque, which marked the beginning of construction by a holiday dinner.