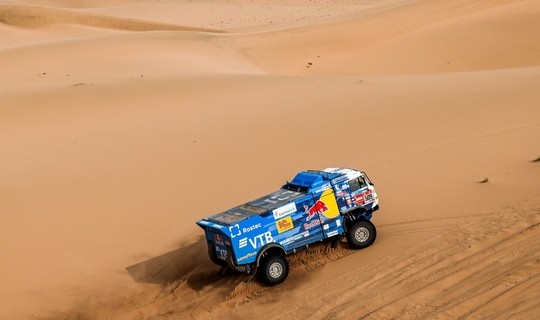 KAMAZ-master wins the Dakar rally for the 18th time.

KAMAZ-master wins the Dakar rally for the 18th time.

The crew of the Russian KAMAZ-master team led by Dmitry Sotnikov has  won  overall offset  of the Dakar rally-marathon among trucks.

At the last, 12th stage, which connected Yanbu-el-Bahra and Jeddah, Sotnikov showed the second result. He lost four seconds to Czech Martin Matsik at Iveco. Another representative of KAMAZ-master, Anton Shibalov, became the third.

This result was enough for Sotnikov to keep the lead in  overall offset. Ours took the entire podium at the end of the marathon. The second was Anton Shibalov, the third – Ayrat Mardeev. For Sotnikov, the victory was the first at the Dakar.

of the Republic of Tatarstan in Moscow