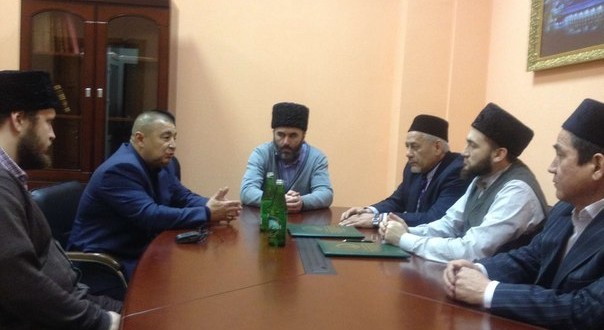 Kamil Samigullin, Mufti of Tatarstan, visited the Tyumen oblast with a guest visit

Kamil Hazrat Samigullin held meetings at the oil capital of Russia with representatives of the Muslim community. During the meeting the ways of cooperation between the two religious boards and the vital issues of life of the Tyumen Ummah. On the next day, after the morning prayers in the historic mosque named after Haji Nigmatulla Kormyshakov in a village Embaevo (Manzhel in Tatar), in the presence of believers an important event – the signing of the agreement between the Religious Administration of the Republic of Tatarstan and the Tyumen oblast have been signed.

“We, Muslims, have nothing to share. We have one Lord, one qibla, one book, one nation and one language. We are the same, and if someone has something to get better, we need to share it and help each other, “- says Kamil Hazrat Samigullin, chairman of the Religious Administration of Muslims of the Republic of Tatarstan.

Under the agreement, Muslim organizations exchange experience, establish joint projects, and most importantly – the mufti of Tatarstan undertook to assist in training for mosques of the Tyumen region.

“There is clearly spelled out that we will endeavor to organize youth movement, educational movement in the organization of preservation of cultural and national values. They prepare staff us for us, help in organizing the youth of the Islamic movement, we for them, “- Zinnat Hazrat Sadykov, Chairman of the Religious Administration of Muslims of the Tyumen oblast explained to journalists,

Press office Congress of Tatars of the Tyumen region