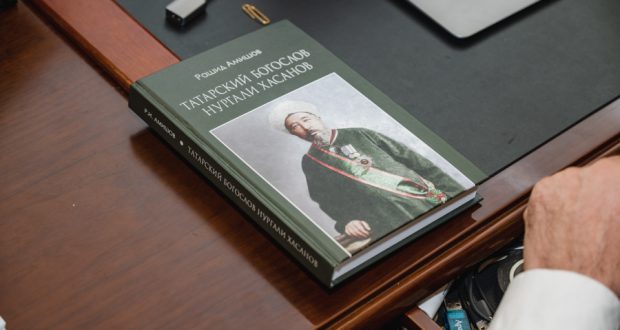 On May 25, the mufti of Tatarstan Kamil hazrat Samigullin met with the scientist-historian, teacher, candidate of sciences Rashid Ilyazovich Amishov. The guest presented the mufti with his new monograph “Tatar theologian Nurgali Khasanov”. For the first time, this work contains information about the life and work of the Tatar theologian, whose name, personality and spiritual heritage were undeservedly forgotten in the Soviet years.

Nurgali Khasanov (1852-1919) – an authoritative Tatar Muslim theologian of the Middle Volga region, sheikh, akhun. For more than 30 years he led the Buinsky Madrasah, taught and educated a large number of outstanding students. With his multifaceted life and religious and educational activities, he left a noticeable mark in the history of the Tatar people. His merits were recognized by the authorities of the Russian and Ottoman empires from which he received high government awards.

Based on reliable sources, the monograph by Kazan historian Rashid Amishov reveals a rich spiritual heritage and information about the personal life and fate of the theologian, his views, socio-political and educational activities, works and publications. The scientific work allows, using the example of the biography of this bright personality, to present even more deeply the historical processes taking place in the religious environment of the Tatars of the Middle Volga region of the late 19th – early 20th centuries. Rashid Amishov’s monograph received many positive reviews from the modern scientific community.

Kamil hazrat congratulated the author on the publication of another scientific work and highly appreciated his research work. The mufti happily emphasized that this monograph revealed a forgotten name in Tatar history and returned the spiritual heritage of Nurgali Khasanov to Tatar culture, enriching modern Tatar scientific and theological thought with new views and works.

During the meeting, Rashid Amishov introduced Mufti Kamil hazrat with his doctoral dissertation on the topic “Daily life of the parish Muslim clergy of the Volga-Kama region of the Russian Empire in the second half of the 19th – early 20th centuries”, dedicated to the life and work of the Tatar mullahs, ishans and abstays of the pre-revolutionary period. The Mufti gave his blessing to the defense of his doctoral dissertation and the publication of this important scientific work.