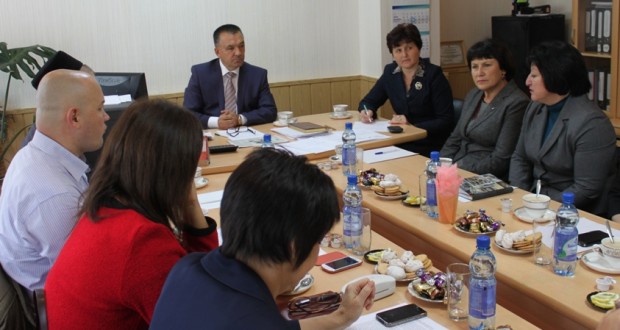 In Almetyevsk State Institute of municipal service, a regular meeting of the Executive Committee of Branch Office of Almetyevsky World Tatar Congress with participation of the head of department on work with the local offices of the executive committee of the World Congress of Tatars Shamsia Zigangirova. Opening the meeting, Rector of the Institute and chairman of the executive committee of the department of Almetyevsky World Congress of Tatars Ilyas Salakh told about the plans of the organization.

He presented a new collection of scientific and creative works of the laureates named after K. Bulatova “Inspiration of his native land.”

Bureau members of Almetyevsk organization spoke about the work done and shared out plans. It was noted that the work of the head of the public organization “Ak kalfak” Landysh Zaripova. Despite the fact that she conducted the organization a few months ago, it has already been done a lot. Director of Almetyevsky of Tatar State Drama Theatre Farida Ismagilova

invited everyone to the opening of the 70th theater season, which will be held on September 26 at 18.00 in the square in front of the theater.