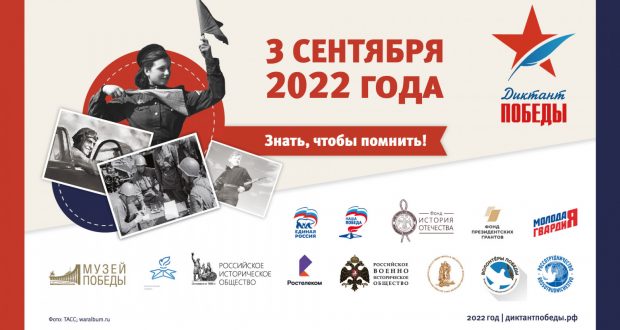 Registration of participants has opened on the website of the United Russia international action “Dictation of Victory-2022”. In Tatarstan, sites will be opened on the basis of large enterprises and universities. This was reported to “Tatar-inform” in the information center of the party.

According to the regional coordinator of the party project “Historical Memory” of “United Russia”, the chairman of the State Committee of the Republic of Tatarstan for Archival Affairs Gulnara Gabdrakhmanova, the republic is actively involved in preparations for the “Victory Dictation”.

“Together with the Ministry of Education and Science of the Republic of Tatarstan, more than 150 open sites for the action have been registered. For the most part, of course, these are schools and universities,” Gabdrakhmanova said. “Traditionally, the dictation will be written on the basis of military and law enforcement agencies: military units, the Kazan and Yelabuga Suvorov schools, the Kazan tank school, the Kazan Law Institute, the Training Center of the Federal Fire Service, the Military Commissariat.”

She clarified that Dictation of Victory was also supported by large enterprises, including the Kazan Powder Plant, Tatkhimfarmpreparaty, and the Sergo Plant.

“I would like to note that the international action of United Russia “Dictation of Victory” is relevant in our time. Every year there are more and more people who turn to the memory of the events of the Great Patriotic War, feel the continuity of generations and the value of accumulated historical experience. Now it is important to continue working to attract adults and the younger generation to this event, because the action is aimed at preserving the historical memory of the history of our country,” Gabdrakhmanova emphasized.

As noted by the coordinator of the party project “Historical Memory”, the chairman of the State Duma Committee on Information Alexander Khinshtein, the number of action sites in Russia is increasing every year. Last year, the “Dictation of Victory” was held at 16.5 thousand venues, and today their number is already more than 17.5 thousand.

“All conditions are being created so that as many people as possible can take part in the Victory Dictation this year, test their knowledge of the history of our country, learn some new information about the exploits of our ancestors,” Khinshtein summed up.