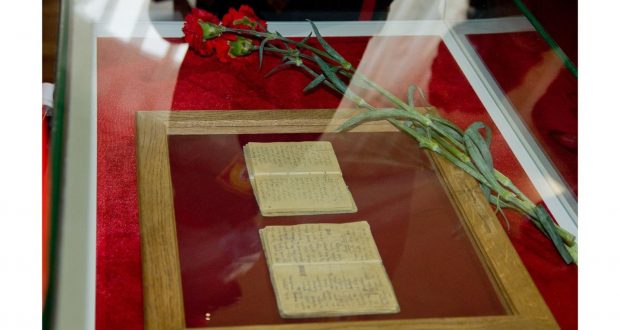 Musa Jalil’s Moabit Notebooks will be presented in Moscow

On January 21, Musa Jalil’s Moabit Notebooks will be presented at the Tatar Cultural Center of Moscow. The exhibit will be shown as part of the II International Music and Poetry Festival “Poet and Music”.

The festival is organized by the Russian Arts Support Foundation “Art Line” with the participation of the government of Tatarstan. The fund’s creative team is led by Jalil’s granddaughter, pianist and teacher Tatyana Malysheva (Moscow). Festival participants are young musicians and readers aged 7-18 from Russia and abroad.

Concerts of the II Poet and Music Festival will be held in January-February 2023. Among them is a concert on January 21 at the Tatar Cultural Center in Moscow. On this day, a copy of the Moabit Notebooks will be exhibited here.

Moabit notebooks are the world-famous cycle of Jalil’s poems, a symbol of patriotism and courage. The poet-hero wrote them in 1942-1944 during his imprisonment in the Moabit prison in Berlin.

Small homemade notebooks are sewn from different pieces of paper. In the first notebook there are 60 verses in Arabic script, in the second – 50 in Latin; 19 poems are repeated. In total, there are 91 poems and 3 fragments in the Tatar language in the cycle.

Through Jalil’s cellmates, the relics came to the USSR. The first notebook was brought to Kazan in 1946 by Nigmat Teregulov, who received it from Gabbas Sharipov; the second in 1947 was handed over to the Soviet embassy in Brussels by the Belgian patriot Andre Timmermans.

The originals of the Moabit notebooks are kept in the funds of the National Museum of Tatarstan and are exhibited in the museum only once a year – on February 15, on the Musa Jalil’s birthday.