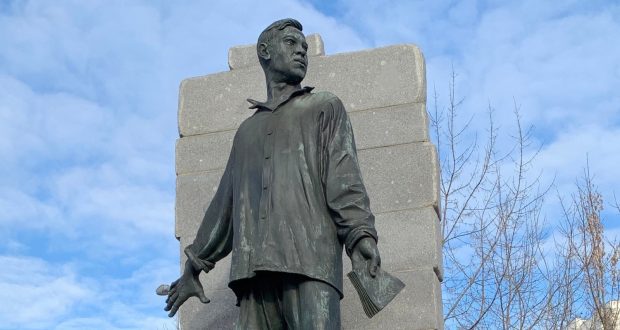 Muscovites will honor the memory of Musa Jalil and his allies

Muscovites will honor the memory of Musa Jalil and his allies

On the day of remembrance of the dead, the Embassy of Tatarstan will hold an annual flower-laying ceremony at the poet’s monument in the capital.

August 25 marks the 78th anniversary of the death of Musa Jalil and his associates.

In February 1944, a Nazi court in Dresden sentenced 11 organizers of underground work to death for undermining the military power of the Reich.

On August 25, 1944, Soviet patriots of the Tatar resistance group against fascism were beheaded on the guillotine in the Plötzensee prison on the outskirts of Berlin.

The feat of Musa Jalil and his associates is an example of fidelity to the military oath and civic duty.

“If I did something important, memorable in my life, then I deserved this life – “life after death”. Because they will talk about me, write about me; paint portraits, erect monuments. If I deserve it, then why be afraid of death? This is the purpose of life: to live in such a way that even after death you do not die … ”, – from a letter from Musa Jalil, which he wrote in January 1942 before leaving for the front.

In Moscow, a monument to the Hero of the Soviet Union appeared in 2012 on the street of the same name. The project was implemented with the support of the Government of Moscow and the Government of the Republic of Tatarstan.

The author of the sculpture is Honored Artist of Russia Yuri Zlotya.