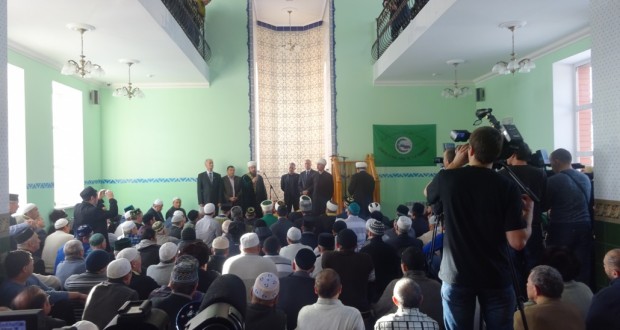 A new mosque in the tourist center of Tyumen region – Tobolsk has been built at the modern part of the city. Hundreds of the Muslims from all over the Tyumen region and other Russian cities came for its opening. This event, as of right, is a historic and long-awaited one. More than a hundred years, not a single mosque opened in Tobolsk city.

“The need for the construction of another mosque has long been felt because a foothill mosque could not accomplish the mission, which is to performed by a mosque. There were very many parishioners , people had to pray on the street, “- says the imam mosque of Tobolsk Hazrat Ibrahim Sukhov.

The temple, an area of six hundred square meters can accommodate up to 800 people. It was built in record time – four years. This was made possible thanks to support from the Government of the Tyumen region, but mostly – a mosque was built by the believers. At the opening ceremony Mufties from different regions have arrived. Mufti Kamil Samigullin from Tatarstan Republic, handed chaban to the new imam of the mosque. After welcoming speeches, the first Friday prayer and sermon was held in the new mosque. Festive service was decorated by prayers from the imams of Turkey. Guests from Istanbul skillfully performed Salavat – praising God.

“I came here to Siberia, from Turkey to meet with my brothers in the faith, to share their joy of opening this mosque. And what is strange, being among the Muslims of Tobolsk, and those who had come from different parts of the Siberian region, from distant places, I did not feel like a foreigner. And even the language that we speak, it brings us together “- says Dzhamaletdin Ball, Mufti of Istanbul.

An important part of the event was the signing of an agreement between the Republic of Tatarstan and Muftiat of Spiritual Administration of Muslims of the Asian part of Russia. The parties have agreed to cooperate. Personnel issue to date – the most relevant and requires a quick solution.

“Today the Mufti Nafigullah Hazrat Ibrahim and Hazrat Imam of historic mosque of Tobolsk, approached us with a request to find the candidacy of a young imam for the new mosque. We told that we would think over, try to search in the framework of our agreement, it will be the first big step “- promised Kamil Hazrat Samigullin, Mufti of the Republic of Tatarstan

The religious building will become a regional center of Islamic education. In the neighborhood in the future there will appear a Muslim complex. Here will be a dining room for the believers, hotel and the main thing – a madrasah for imams from rural mosques.