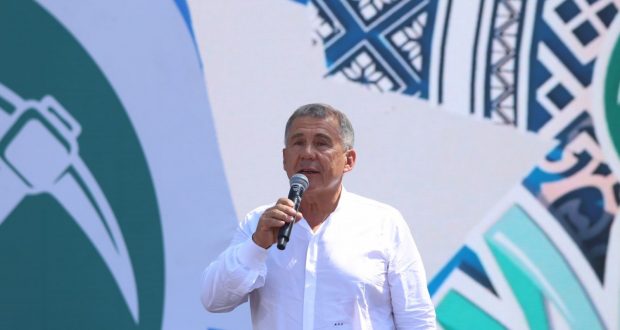 Novokuznetsk hosted the opening of the International Mining Sabantuy

Today Novokuznetsk is hosting the II International Mining Sabantuy. Marketplaces, national courtyards, a maidan for the national wrestling “Koresh” and other objects were deployed on Theater Square and in the Garden of Metallurgists.

Traditionally, the President of the Republic of Tatarstan Rustam Minnikhanov, the Governor of the Kemerovo region Sergey Tsivilev and other honored guests were met here with songs and chak-chak. The guests were presented with Tatar skullcaps and invited to the national holiday – Sabantuy!

The official opening began with a parade – a greeting, in which representatives of the labor collectives of coal mining enterprises from the Altai, Primorsky, Perm Territories, from the Republic of Komi, the Republic of Tatarstan, from Novosibirsk, Orenburg, Tomsk, Sakhalin, Sverdlovsk regions. There are also guests from Kazakhstan, Kyrgyzstan and Donbass. The guests applauded the veterans

labor, entire labor dynasties, whose total experience reaches 300 years, and those miners who continue the work of coal mining at the present time.

President of the Republic of Tatarstan Rustam Minikhanov addressed the guests of the holiday with a welcoming speech. He thanked the Governor of the Kemerovo region Sergey Tsivilev, expressed his gratitude to the city administration, the organizers of the holiday and the residents of the city.

– Today we are holding Sabantuy on the territory of Kuzbass. We are honored to be in such a powerful industrial region. Today we honor miners not only from Russia, but also from foreign countries. Sabantuy is a Tatar national holiday, but it is for everyone. Our country is multinational. Sabantuy gives people the opportunity to show their culture, to acquaint them with their traditions. We are glad to see our compatriots living here among the guests. Kuzbass makes a huge contribution to the development of Russia. Next year, the Federal Sabantuy will be held here. Happy holiday everyone! – Rustam Minikhanov congratulated the guests.

Also, the guests were greeted by the Governor of the Kemerovo region Sergey Tsivilev:

– This year we are celebrating the 300th anniversary of the coal industry in Russia. When I was in Tatarstan, I was told about how Tatar miners came to Kuzbass. These were people who came to work in the mines, people who provided for their families. They worked here. We have always lived together, all 150 nationalities living on the Kuzbass land. We have always built our country together. Miner’s Sabantuy is a holiday of all nationalities. We are holding Sabantuy in honor of working people!

Also, state awards of the Republic of Tatarstan and the Kemerovo region were presented here.