Home / News / On the stage of the State Big Concert Hall named after S. Saidashev will show the musical comedy of Jaudat Faizi “Khuzha  Nasretdin” 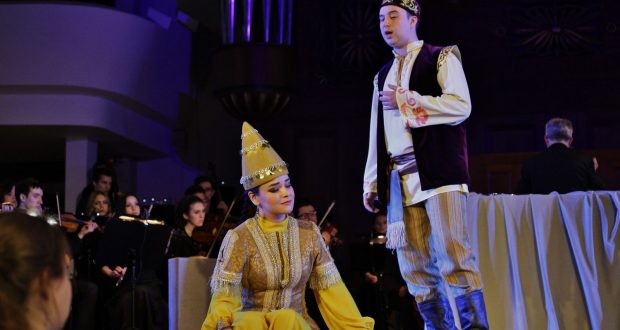 On the stage of the State Big Concert Hall named after S. Saidashev will show the musical comedy of Jaudat Faizi “Khuzha  Nasretdin”

The musical comedy of Jaudat Faizi “Khuzha   Nasretdin” will be shown on the stage of the State Big Concert Hall named after S. Saidashev

The opera studio of the Kazan Conservatory is preparing a New Year’s present for the audience. On December 22, on the stage of the State Big Concert Hall named after S. Saidashev, the musical comedy by Jaudat Faizi “Khuzha  Nasretdin” in the Tatar language will be shown. The performance is dedicated to the 110th anniversary of the composer’s birth.

Stage director of the play is Rinat Bektashev, Honored Art Worker of Ukraine. The plot is based on the story about a legendary oriental character, told in the play by Naki Isanbet. The witty Huҗa stands up for justice, knows how to laugh at himself and communicates with everyone on an equal footing, regardless of dignity and class.

According to  director, this production is a kind of fantasy, an attempt to look at the past through the eyes of a modern person. At the same time, the performance recreates  tradition of the so-called “school of performance”, which is characterized by  demonstration of exaggerated, exaggerated passions.

Music by Jaudat Faizi will be edited and orchestrated by Ilyas Kamal. In addition, several of the young author’s own compositions will organically complement  sounding fabric of the performance.

The production also involves  Tatarica Orchestra under the baton of the Honored Art Worker of the Republic of Tatarstan Rinat Khalitov and  Opera Studio Choir (directed by Gulnaz Akbarova).

An important role in the preparation of the performance is played by accompanists Tatyana Safonova and Venera Gataullina, acting skills, Honored Artist of the Russian Federation Liya Zagidullina and speech technique teacher, Doctor of Philology Gaptrauf Nuriev.

It is not the first time that the opera studio of the Kazan Conservatory has turned to the work of Jaudat Faizi – in 2010 the sparkling musical comedy “Shoes” was staged, which earned high praise from critics and the love of the public.