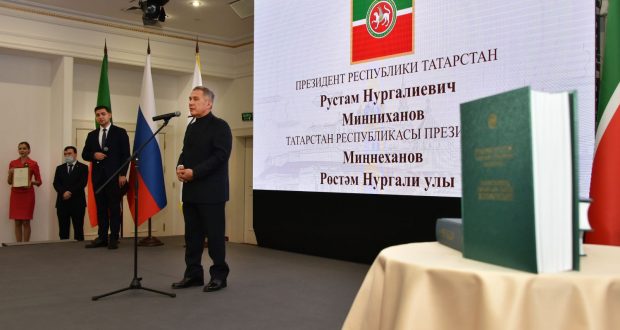 Today  President of the Republic of Tatarstan Rustam Minnikhanov took part in the presentation of the book “Leaders of cities and regions of Tatarstan.”

The event took place at the Korston State TV and Radio Broadcasting Company.

The three-volume edition was published as part of the celebration of the 100th anniversary of the TASSR, in two state languages ​​- Russian and Tatar, with a circulation of 1,000 copies.

The uniqueness of the publication is that the history of the republic is revealed through the fate of people.

The book includes information about all the leaders of the cities and regions of the republic, starting from 1920-30. The total number of managers was 1124 people.

So, in different years, there were 119 districts on the territory of the republic, of which 66 were abolished or reorganized.

The publication is illustrated with a large number of archival photographs.

As it was noted during the presentation, a number of leaders were subjected to political repression, all of them were subsequently rehabilitated.

The four first party secretaries from the TASSR took part in the Victory Parade in Moscow in 1945.

Asgat Safarov, Chief of Staff of the President of the Republic of Tatarstan, recalled that the project had been working for two years, hundreds of requests were sent to the archives of the country’s regions, as well as to Belarus, Ukraine and other countries.

The publication will be sent to libraries, museums – to preserve the history of the region and the memory of the leaders of cities and districts.

President of the Republic of Tatarstan Rustam Minnikhanov, in turn, thanked the project team for the tremendous work done. According to him, this book will be in demand. Rustam Minnikhanov also proposed to translate the publication into electronic form – to provide access to as many readers as possible.

This is a very high quality publication, said Rustam Minnikhanov.

During the presentation, Rustam Minnikhanov presented a letter of gratitude from  President of the Republic of Tatarstan to Indus Tagirov, the scientific editor of this historical publication.