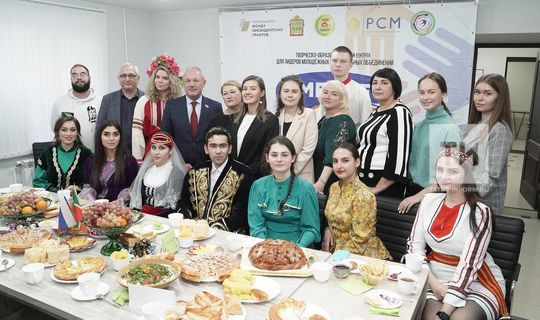 On October 29, in the office of the Tatar autonomy, a round table “Interethnic relations and interethnic communication” was organized and held, timed to coincide with the Day of National Unity. The speakers were the chairman of the RPO “TNKA PO” Tuktarov Zh. kyzy ”, Deputy Chairman of the World Forum of Tatar Youth Giniyatullina G.Sh., Deputy Director for Educational Work of the Institute of Economics and Management of PSU, Candidate of Economic Sciences, Associate Professor I.A.

Representatives of the youth of the NCA of the Penza region took part in the round table meeting. The guys came in national costumes and brought their national dish as a gift. During the work of the round table, they discussed issues of interethnic interaction, issues of maintaining friendly ties between peoples living in the Penza region. We also discussed issues of self-identification, digitalization. Thanks to the meeting, the guys learned a lot, asked questions and shared opinions.
Representatives of the World Congress of Tatars also took part in the work of the round table.

Our friends from Kazan talked about their projects, new ideas and plans for the future. They also emphasized that the event is relevant in the modern conditions of globalization. In their speech, they noted the importance of the participation of every citizen of the Russian Federation in the population census.

We live in a huge multinational state. Youth is the future of the country’s development, its success in building a better life, in friendship, mutual understanding and respect for any national culture.