Home / News / In Zelenodolsk, the winners of the zonal tour “Our Time – Bezneң Zaman” determined 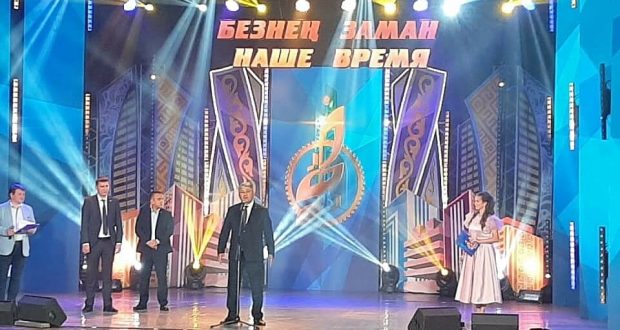 In Zelenodolsk, the winners of the zonal tour “Our Time – Bezneң Zaman” determined

Representatives of Zelenodolsk and Drozhzhanovskiy districts of Tatarstan became the winners in the team event of the zonal round of the festival “Our Time – Beznek Zaman”. The gala concert of the television festival of working youth ended the day before, in Zelenodolsk. IA “Tatar-inform” was informed about this in the press service of the Zelenodolsk region.

“The zonal stage took place at the TsKINT after Gorky. In the afternoon passed the qualifying stage, in the evening a gala concert. There were no spectators at the concert, only members of the jury headed by Dmitry Tumanov, director of the Republican Center for Supporting Creatively Gifted Children and Youth “Constellation – Yoldyzlyk” Regina Chibrikova, Head of the Public Relations and Media Department of the Zelenodolsk District Council Office.

Among the guests of honor, the festival was attended by the head of the Zelenodolsk municipal district, the mayor of Zelenodolsk Mikhail Afanasyev.

“We are pleased and proud to host the zonal stage in Zelenodolsk. Our Time – Bezneң Zaman is one of the best festivals that allows us to reveal the talents of our youth – working youth. Here are our people who are capable of conquering the heights of excellence, ”said the leader.

According to the results of the team classification, the first place was shared by the Zelenodolsk plant named after Gorky and the TNV-TYAG Youth Wing from the Drozhzhanovsky district of the Republic of Tatarstan, the second place went to the Apastov Agrarian College. A special jury prize “For dedication to the profession” was awarded to the creative team of the Bolsheklyuchinsky school of the Zelenodolsk region.

“Incredible competition, talented guys – the choice for the jury members was not easy. The winners and awardees will take part in the final gala concert, ”the press service said.