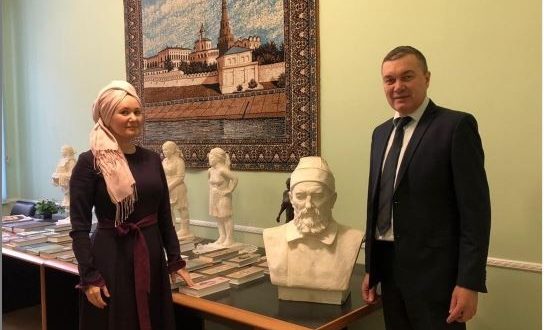 Recently, the first meeting this year of the Permanent Representative of the Republic of Tatarstan in the city of St. Petersburg and the Leningrad region – Renat Nakifovich Valiullin and the journalist of the portal Piter.tatar – Katifa Gainetdinova, was held, at which the programs of upcoming events for 2021 were discussed.

The priority agenda was the Project in honor of the Hero of the Soviet Union – Musa Jalil. February of this year will mark the 115th anniversary of the birth of the Tatar poet, who was also a war correspondent. The events of today are at the end of the eras, and Jalil’s work in the light of shifts in society is gaining relevance and acuteness, especially among young people, and the example of Jalil’s fate is an appeal not to get lost in the virtual world, to learn to look into the depths of things and see the interconnections of processes.

Tatarstan has declared 2021 the Year of Native Languages ​​and National Unity, which gives the journalistic community a separate responsibility for disclosing the topic of linguistics.

At the end of the meeting, the journalist was presented with an edition of the translation of the meanings of the Koran in the Tatar language – “Kulam Shrif. Mәgynәvi tәrҗemә “, on which 40 people worked for 7 years, and in the preparation were used explanations in the Tatar and Old Tatar languages. The gift became symbolic, especially when the book was opened and the name of Sura was seen, it turned out to be 26 Sura “Poets – Ash-Shu’ara”, where, as is known, two poets are compared as an example, one used words for the sake of pride, and the other, by the power of words stimulated in a person godly feelings and deeds.

So in life, the year began, the intentions took shape in an action plan, and now, it is important that the words of journalists, their materials and reports in their essence carry a constructive appeal for the reader.

Portal of the Tatars of St. Petersburg and the Leningrad Region