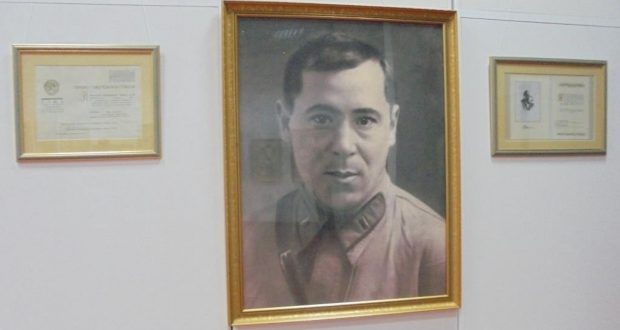 On January 19, 2021 at the Municipal Budgetary Institution “Museum of the Kaibitsky Region” the exhibition “Perishing, the Hero will not Die!” is due to  open.

The traveling exhibition “Perishing    the Hero Will Not Die …” was created within the framework of the inter-museum exhibition project of the National Museum of the Republic of Tatarstan and the Musa Jalil Museum-Apartment for republican museums and is dedicated to the life and work of the famous Tatar poet, Hero of the Soviet Union, Lenin Prize winner Musa Jalil. He became widely known for the cycle of poems “Moabit Notebooks”, written in fascist dungeons.

Every year on February 15, the National Museum of the Republic of Tatarstan celebrates the birthday of the hero-poet Musa Jalil and hosts the “Day of the Original”, when the “Moabit Notebooks” are taken out of the funds and presented to the general public. These immortal works, written by the poet before his death in Berlin’s Moabit prison, miraculously survived and have come down to us, are one of the most valuable exhibits in the museum.

On the eve of the 115th anniversary of the birth of the famous Tatar poet, the traveling exhibition will be presented to residents and guests of the village of Bolshie Kaibitsy in the “Museum of the Kaibitsy Region” and will be included in a series of events, which are conferences, lectures and excursions.

The exhibition will run until February 10, 2021 in the halls of the “Museum of the Kaibitsky Region” located at the address: Kaibitsky District  village  Big Kaibitsy, Gismatullin St., 3.