Home / News / President of Tatarstan: We will do everything so that the feats of our grandfathers and great-grandfathers in the Great Patriotic War are never forgotten 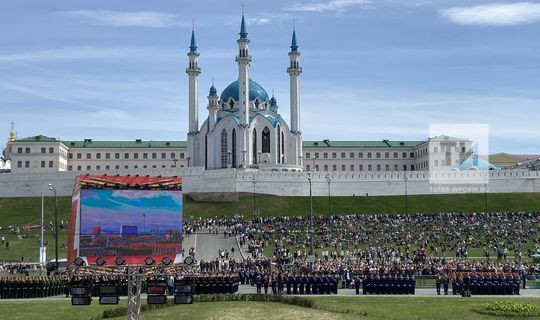 President of Tatarstan: We will do everything so that the feats of our grandfathers and great-grandfathers in the Great Patriotic War are never forgotten

President of Tatarstan: We will do everything so that the feats of our grandfathers and great-grandfathers in the Great Patriotic War are never forgotten

The official part of the event began with a march with the Victory Banner, the state flags of the Russian Federation and the Republic of Tatarstan.

Then a live broadcast of the military parade on Red Square was organized. President of Russia Vladimir Putin congratulated the citizens of the country on the 76th anniversary of the Victory.

“We will always remember that it was the Soviet people who performed this magnificent feat. In the most difficult time of the war, in the decisive battles that determined the outcome of the struggle against fascism, our people were united on the arduous, heroic and sacrificial path to Victory. He fought to the death at all frontiers, in fierce battles on land, at sea and in the sky, ”the head of state emphasized.

In memory of those killed in the Great Patriotic War, Vladimir Putin announced a minute of silence.

Further in Kazan, on Millennium Square,  President of the Republic of Tatarstan Rustam Minnikhanov addressed the audience. He noted what the republic is doing to preserve the memory of the exploits of Soviet soldiers and home front workers. Below are the theses of the President of Tatarstan:

76 years ago, the Victory Banner was hoisted over the defeated Reichstag in Berlin. This became a symbol of the final collapse of Nazism and the end of the bloodiest and most brutal war in the history of mankind.

On this sacred day, we pay tribute to the memory and boundless respect to those who went to meet death in battles, worked in the rear without sleep or rest. You have accomplished a great feat that we will never forget. Low bow to you and deepest recognition for the Great Victory!

We will do everything so that the feats   of our grandfathers and great-grandfathers are not forgotten, and our citizens live in a strong and prosperous country. The glorious fighting traditions of the generation of heroes are being adequately continued by the Russian army. Under the leadership of Supreme Commander-in-Chief Vladimir Vladimirovich Putin, the country’s defense power, combat potential and prestige of the Armed Forces of the Russian Federation are growing.

Search detachments of Russia and Tatarstan return hundreds of names of the fallen defenders of the Motherland, with honors burying their remains.

Dear veterans! Dear friends! With all my heart I wish you all good health, prosperity, and a peaceful sky over your head!

With deep respect and pride, we bow our heads to the fallen on the battlefield. The memory of the great feat of our people will forever remain in our hearts. Happy Victory Day! ”

Then  head of the Kazan garrison, Major General Kirill Kulakov made a detour of the troops of the parade crew, and reported to the President of Tatarstan about their readiness to start the parade.

The troops of the Kazan garrison, representatives of the Kazan military schools, republican public associations marched across the Millennium Square. The passage of military and specialized equipment, retro cars took place.