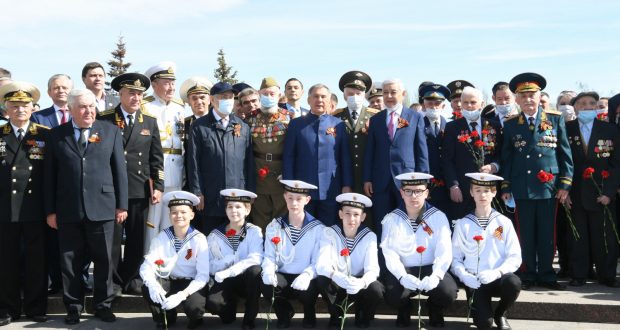 Eternal Flame of the Glory Memorial Colonnade in the Kazan Victory Park. Together with him, the State Counselor of Tatarstan, Hero of Labor of Russia Mintimer Shaimiev, Chairman of the State Council of the Republic of Tatarstan Farid Mukhametshin, Prime Minister of Tatarstan Alexey Pesoshin, Mayor of Kazan Ilsur Metshin and veterans of the Great Patriotic War took part in the ceremony.

Upon arrival at the Victory Park, Rustam Minnikhanov was greeted by the youth army and representatives of a number of youth organizations. In response to the President’s congratulations on Victory Day, the youth responded with a friendly three-fold “Hurray!” Then Rustam Minnikhanov greeted the veterans who came to pay tribute to the fallen heroes.

Laying wreaths and flowers at the Eternal Flame, they honored the memory of those who fell during the war with a minute of silence. State anthems of the Russian Federation and the Republic of Tatarstan were played.

Then  President of the Republic of Tatarstan got acquainted with the photo exhibition “City of Labor Valor”. We remind  that in 2020 Kazan was awarded the honorary title “City of Labor Valor”. The exposition features photographs and documentary materials about enterprises and their employees who contributed to the Victory. Rustam Minnikhanov suggested expanding the exhibition, adding information about prominent figures in science and industry of Tatarstan.

In conclusion,  President visited the cabin of the submarine K-403 “Kazan”, where he talked with the sailors and took a memorable photo with them.

After that Rustam Minnikhanov and Mintimer Shaimiev went to Millennium Square in a vintage car “Victory” to participate in the parade of the Kazan garrison troops on the occasion of Victory Day.