Home / News / Rustam Minnikhanov: “The heroic deeds  of the Tatarstan people during the Great Patriotic War will never fade” 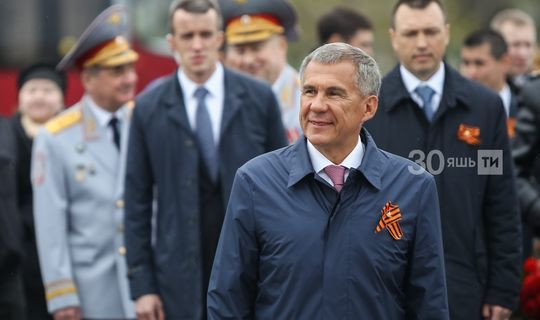 Rustam Minnikhanov: “The heroic deeds  of the Tatarstan people during the Great Patriotic War will never fade”

The acts of bravery  committed by the Tatarstan people during the Great Patriotic War will never fade. Confidence in this was expressed by  President of Tatarstan Rustam Minnikhanov in his address to the residents of the republic on the occasion of the 76th anniversary of the Great Victory.

“Dear people of Tatarstan! Dear front-line soldiers and home front workers! On behalf of the State Council, the Government of the Republic of Tatarstan and on my own behalf, I congratulate you on the 76th anniversary of Victory in the Great Patriotic War! ” – said  head of the republic in his congratulations.

According to  President of the Republic of Tatarstan, “the unforgettable day of May 9 is forever inscribed in the past, present and future of our multinational people, the indestructible Russian state, and all liberated mankind.” In this regard, he recalled that representatives of the post-war generations owe the life, freedom and independence of their homeland to the heroic Soviet soldiers and millions of workers who forged the weapon of Victory in the rear.

“The Great Victory became a symbol of unparalleled courage, selfless feat, spiritual unity and the triumph of high ideals of good and justice over the forces of evil and the criminal ideology of Nazism. Paid at a huge, irreplaceable price, it is for us a moral standard of civicism and patriotism, serving as a decisive warning to all those who dream of plunging the world into the bloody abyss of war again, ”Rustam Minnikhanov is convinced.

Separately, he dwelled on the valiant deeds of the natives of the Tatar ASSR. “In the close-knit ranks of the defenders of the Motherland, more than seven hundred thousand of our fellow countrymen fought heroically, more than half of whom died on the battlefields, died in death camps and died of wounds in hospitals. The glorious deeds of Musa Jalil, Mikhail Devyatayev, Maguba Syrtlanova, Petr Gavrilov, Gani Safiullin, Boris Kuznetsov, Gazi Zagitov, Mikhail Simonov and many other Tatarstan residents will never fade in our hearts,” President of the Republic of Tatarstan emphasized.

Paying attention to the fact that on this bright day the Russians bow their heads before the fallen heroes and victims of the war, pay tribute to the home front workers, Minnikhanov remarked: “Time is inexorable. The heroes are leaving for eternity, passing on the baton of the heroic achievements of the youth ”.

As an example of a living connection between generations, he cited the active participation of the Tatarstan people in the all-Russian actions “St. George’s Ribbon” and “Immortal Regiment”, the search movement “Snow Troopers” and the “Book of Memory” project. At the same time, the President of Tatarstan is confident that in the future the military-patriotic work in the republic “will grow with new constructive deeds.”