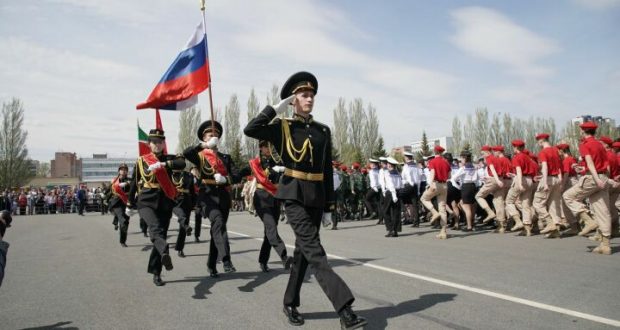 A festive parade of youth soldiers and law enforcement detachments of city schoolchildren took place in the Kazan Victory Park. The participants of the celebration demonstrated their drill skills to the guests of the park.

Before the start of the parade,  head of the Kazan Department of Education Irek Rizvanov addressed the schoolchildren. He greeted the participants of the celebration in Tatar and Russian and congratulated everyone on the Great Victory Day.

According to Rizvanov, the modern young generation is actively adopting the best qualities of their grandfathers and great-grandfathers – valor, courage and devotion to the Motherland. He recalled that the war came at a time when many of today’s veterans were still teenagers. But this did not prevent them from defending their home country and their home from the aggressor.

“Thanks to our grandfathers and great-grandfathers, their heroic deed, today we have a peaceful sky over our heads. And we will never forget this. It is hard to imagine that they met the war at your age of 12-17 – as schoolchildren and children, ”Irek Rizvanov said to the schoolchildren.

He added that the main task that falls on the shoulders of young people today is to preserve the memory of those who gave their lives for the Victory. And the participants of the Kazan military-patriotic youth movements are honorably fulfilling this duty.

“I thank each of you for participating in this large-scale, extraordinary event. I am sure that we will pass on this sense of responsibility, patriotism and love for the homeland to subsequent generations, “Irek Rizvanov summed up.

At the end of the official part of the event, the ceremony of awarding the best combat troops among Kazan schools started.