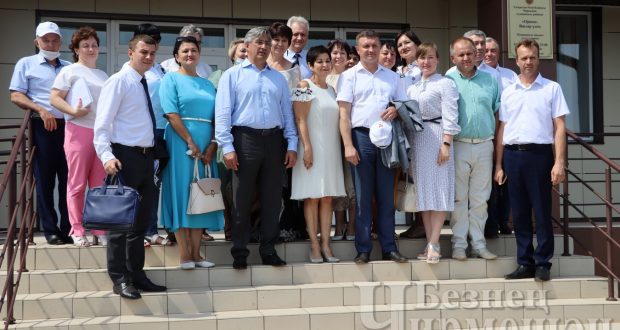 A visiting session was held in Cheremshan within the framework of the Year of Native Languages ​​and National Unity.

“This meeting has been held in Cheremshan for the eighth time,” said Vasil Shaikhraziev, Deputy Prime Minister of the Republic of Tatarstan, Chairman of the National Council of the World Congress of Tatars. – Our main task is to study the experience of working in municipal areas and use it in practice.

During the round table, the issues of the development and preservation of native languages ​​were raised. As noted in the speeches of representatives of the Almetyevsky, Leninogorsky and Novosheshminsky districts, much still needs to be done in the field of teaching Tatar and other native languages ​​in schools, as well as organizing the educational process in kindergartens.

In the Cheremshan kindergarten “Skazka” 83 kids are being brought up, more than 60 percent of whom are Tatars. In the future, in agreement with the parents, they plan to transform this preschool institution into a kindergarten with an educational process in the Tatar language. Vasil Shaikhraziev also visited here, got acquainted with the educational process.

The guests were also welcomed by  deputy head of the region, Gabdurashid Zamaltdinov, who noted that specific measures would  be taken to improve activities for the development and preservation of native languages.