Home / News / R. Minnikhanov and I. Metshin visited the VIII Congress of the World Congress of Tatars 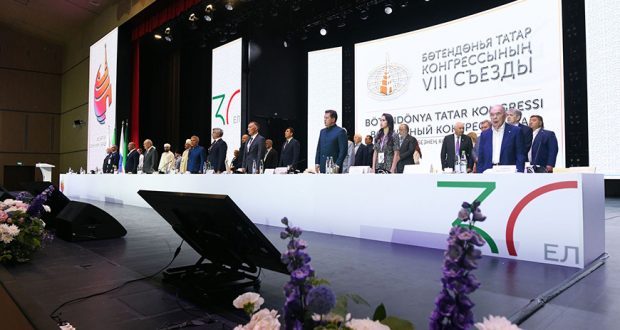 The event brought together more than 1,500 delegates and guests from 76 regions of Russia and 35 countries of near and far abroad.

Opening the plenary session, Deputy Prime Minister of Tatarstan Vasil Shaykhraziev read out a congratulatory telegram on behalf of Russian President Vladimir Putin. The head of state expressed confidence that the current congress would be a bright event in the life of the Republic of Tatarstan and would contribute to the strengthening of friendship and mutual understanding between the peoples of Russia. “Today, representatives of the Tatar people honestly fulfill their duty to the Motherland, defend the Fatherland, demonstrate outstanding achievements in labor, science, culture, sports, and other areas,” the text of the telegram says.

In his video message, Deputy Prime Minister of Russia Marat Khusnullin noted that over the past 30 years, the congress has carried out a huge educational work and contributed to the establishment of strong cultural ties.

Also congratulatory telegrams were sent by the President of Turkmenistan Serdar Berdimuhamedov, representatives of a number of countries and heads of Russian regions.

In his welcoming speech, the President of Tatarstan thanked the forum participants for their active position regarding the future of the Tatar people. “In our work, we rely primarily on you. I thank you for your patriotism, consistent work on the study, preservation and development of the native language, traditions, spiritual and moral values,” said Rustam Minnikhanov.

He noted that meaningful reports were made at the meeting, in particular, the speakers identified a number of problematic topics that have yet to be studied. “We have recorded all your proposals. We will work together on them,” Rustam Minnikhanov emphasized.

According to the President of the Republic of Tatarstan, one of the main challenges of the modern era is globalization. “How can we preserve our national identity, our rich historical and cultural heritage, and family values ​​under these conditions? Of course, family plays a big role. Religion also plays an important role. In mosques, it is necessary to create conditions for learning the Tatar language. A significant contribution to the preservation of the language and national traditions is made by the Selet movement. We plan to actively develop new projects, attract other regions,” Rustam Minnikhanov noted.

He recalled that 2022 is marked by an important event – the celebration of the 1100th anniversary of the adoption of Islam by the Volga Bulgaria. Rustam Minnikhanov expressed gratitude to Russian President Vladimir Putin and Deputy Prime Minister of the Russian Federation Marat Khusnullin for the opportunity to celebrate the anniversary at a high state level. Festivities will continue throughout the year. Soon they will be held in Moscow.

“I am very glad every new meeting with you. There is no doubt that together we are able to solve all the tasks set before us. Our strength is in unity,” said Rustam Minnikhanov, addressing the delegates.

Mintimer Shaimiev noted that the first congress of the World Congress of Tatars in 1992 fully justified all expectations. “30 years ago, we, Tatars from all over the world, gathered for the first time in our historical homeland. At that time, the very fact of convening a forum and confirming the spiritual unity of the Tatars was important. Having established the executive committee of the World Congress of Tatars, the first congress fulfilled its task. We came to a common opinion that we must think about the Tatar nation as a whole. Tatarstan should fulfill the function of uniting the entire Tatar diaspora and positively influence the national policy of Russia. Over the past 30 years, our congress has been consistently working in this capacity,” stressed the State Counselor of Tatarstan.

Also at the meeting, the delegates re-elected Vasil Shaikhraziev as the chairman of the Milli Shura National Council and approved the new composition of the organization, the press service of the President of the Republic of Tatarstan reports.