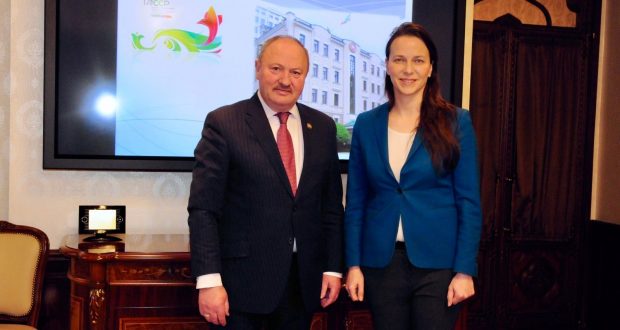 Rector of the Russian Social University visited the Embassy of Tatarstan

Rector of the Russian Social University visited the Embassy of Tatarstan

The Plenipotentiary Representation of the Republic of Tatarstan in the Russian Federation was visited by  rector of the Russian State Social University (RSSU), Doctor of Economics Natalya Pochinok.

Tatarstan and RSSU have a lot in common, namely, active participation in  development and application of innovative products,  development of digitalization,  formation of an environment for self-realization of people with any health potential, and much more.

Today, more than 70 students from the Republic of Tatarstan are studying at the RSSU.

Ravil Kalimullovich told the guest about  directions of work of the Plenipotentiary Mission, clubs created according to interests and events held. He paid special attention to activities aimed at uniting youth.

Seven years ago, at the Plenipotentiary of Tatarstan, a Youth Council was formed, which today includes 15 Tatarstan communities created at the capital’s universities.

Throughout the year, young people hold many events – sports, creative and charitable. Every year the guys choose the most beautiful Tatar girl at the Tatar Kyzy (Tatar Girl) contest, write a dictation in Tatar, and choose the best projects at the Hereket (Movement) competition.

The planned signing of agreements with the Russian State University of Oil and Gas named after I.M. Gubkin and Moscow Polytechnic University due to the pandemic were postponed until next year.

The Russian State Social University (RSSU) is the first social university in the country. Founded in 1991 with the aim of continuing  research and teaching activities of the former High School of the Communist Party. Initially, research and teaching focused on  social and political sciences. Gradually, the university’s activities expanded to project work on social policy for public institutions, as well as training and support for existing administrators.

RSSU became the first university in Russia to launch educational programs in the areas of social work, social work with youth, social insurance, and social support for disabled people.