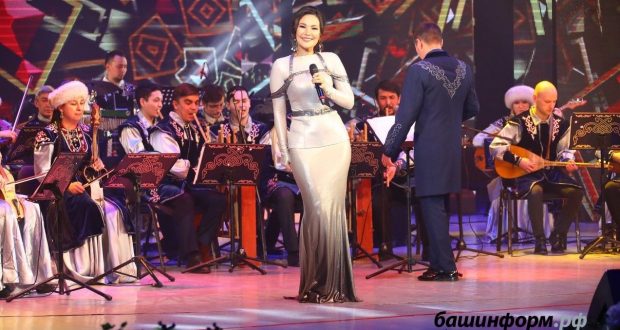 Ufa hosted the International Festival-Contest of Bashkir and Tatar Songs “Idel”. This year has become a jubilee for the festival – the project celebrates its 10th anniversary. This year it has  received a grant from the Head of the Republic of Bashkortostan to cultural and art workers.

Students and graduates of vocal departments of universities and colleges from Bashkortostan, Tatarstan, Moscow and other regions of Russia participate in the project annually.

On December 5, the anniversary gala concert of the festival took place at the State Concert Hall “Bashkortostan”. Due to the current epidemiological situation, the organizing committee decided to cancel the competition part this year. Honorary guests and outstanding festival laureates of the past years were invited to the event.

The participants of the concert received valuable gifts from the organizing committee and partners of the festival. Director of the festival Lilia Badamshina was awarded the title “Honored Worker of Culture of the Republic of Tatarstan”, and also received letters of thanks from the Deputy of the State Duma of the Russian Federation Zugura Rakhmatullina and the Permanent representative of the Republic of Tatarstan in the Republic of Belarus Yusup Yakubov. Project coordinator Diana Bayturina received a commemorative badge “To the 100th anniversary of the TASSR.”

Idel laureates Zilia Bakhtieva (2013) and Rafis Sirusin (2015) received letters of thanks from the Ministry of Culture of the Republic of Tatarstan. The laureates of the festival Aigul Khaernasova (2018), Ruslan Gabbasov (2016), Aytugan Valmukhametov (2016), Nurziya Sabitova (2014) and Almas Khusainov (2017) received letters of thanks from the World Congress of Tatars.

Video postcards from the laureates of past years: soloists of the Royal London Theater, Covent Garden Aigul Akhmetshina (appeal from Tokyo) and Liliana Gazizova (appeal from New York) became a pleasant surprise.

In the program of the gala concert with the National Orchestra of Folk Instruments under the direction of Linar Davletbaev, jury members and outstanding laureates of the festival performed: Idris Gaziev, Ilgam Valiev, Rafis and Almas Sirusiny, Ziliya Bakhtieva, Alfiya Nigmatullina, Aytugan Valmukhametov and others took part.

The international festival-competition of Bashkir and Tatar songs “Idel” has been held since 2011, declared the Year of strengthening interethnic harmony in Russia. Over the years, young performers from Ufa, Kazan, Moscow, St. Petersburg, Oktyabrsky, Sterlitamak, Sibay, Ulyanovsk have performed at the competition; Zianchurinsky, Burzyansky, Ermekeyevsky, Ilishevsky, Baimaksky, Salavatsky districts of Bashkortostan. Thanks to the festival, the popularity of Bashkir and Tatar songs among representatives of other nationalities is growing – singers from Latvia, Georgia, China, and Mexico have become laureates of the festival in different years. For the right to be called the “Idel Festival Laureate” they compete in  nominations: “Bashkir” or “Tatar folk song”, “Author-performer”, “Bashkir” or “Tatar pop song”, “Academic song”, “Children’s nomination”. In 2019, the event took place as part of the Culture National Project with  support of the Ministry of Culture of the Russian Federation.