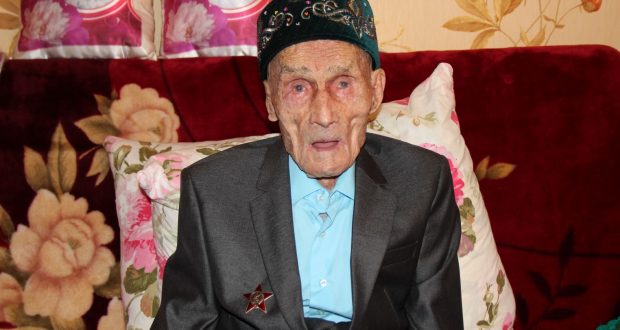 Today a significant event took place in the village of Bayukovo, Muslyumovsky district. The veteran of the Great Patriotic War, Gindulla Sakhipov,  the Order of the Red Star  has been awarded. The Order  was awarded to him back in 1945 for the valor and courage shown in the fight against the enemy.

May 1, 1945 in the area of ​​the river. Miedsendorfna at the time of the enemy’s artillery raid, the Red Army soldier Sakhipov, left alone at the mortar under a hail of bullets and heavy artillery fire, opened heavy fire from his mortar and helped to repel the enemy counterattack.

On May 6, 1945, in the area of ​​the German village of Nigaroda, Gindulla Sakhipov with fire from his mortar suppressed 2 machine guns, knocked out 1 enemy self-propelled gun and destroyed the enemy machine gunners   numbering about  platoon.

By the decree of the Presidium of the Supreme Soviet of the USSR, Gindulla Sakhipov was awarded the Order of the Red Star. However, for a number of reasons, the award was not presented. The order found its owner 75 years later.

Vasil Shaikhraziev, Deputy Prime Minister of Tatarstan, Chairman of the National Council of the World Congress of Tatars, took part in the solemn event in the village of Bayukovo. The meeting was also attended by the military commissar of Tatarstan, Major General Sergei Pogodin. The leaders presented the veteran of the Great Patriotic War with an honorary award.

Currently, Gindulla Sakhipov lives in the village of Bayukovo with his wife Naziba Sakhipova. They raised three children. Children and grandchildren regularly visit the couple.