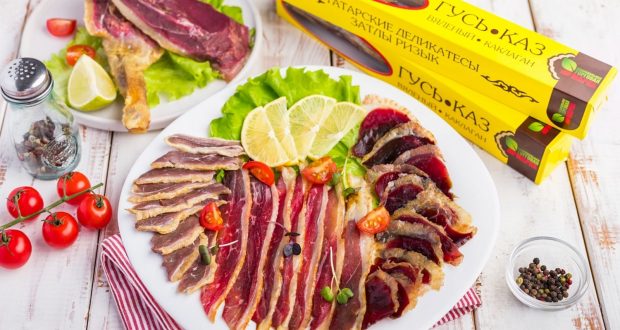 Tatarstan products became winners of the “Tastes of Russia” competition

The ceremony of summing up the results of the first national competition of regional food brands “Tastes of Russia”, organized by the Ministry of Agriculture of Russia, took place in Moscow. The prospects and potential of brands in 7 nominations were determined by an expert competition committee, and the winners in the nomination “We are chosen” were determined by all residents of Russia in a vote that took place from November 19 to December 2, 2020. More than a million people took part in the survey!

Tatarstan was noted as one of the most active participants in the competition. The Ministry of Agriculture and Food of the Republic of Tatarstan submitted 22 brands to the contest. The winner (1st place) in the “Tasty Nearby” nomination was the Tatar dried goose, and the Kazan chak-chak became the leader (2nd place) in the “Try it, you’ll love it” nomination.

The Ministry of Agriculture of Russia plans to make the “Tastes of Russia” contest annual. And possibly more active support of the Tatarstan people next year will help our most delicious products to win in the popular vote.

“Participation in the competition gives its participants not only reputation advantages. A set of measures will be implemented for the winners to promote local brands, which will allow them to get even closer to the most interesting, original and, most importantly, high-quality Russian products, ”said Minister of Agriculture Dmitry Patrushev at the ceremony to determine the winners.

According to him, “victory in this case is not just a matter of image, it is concrete actions aimed at increasing the economic efficiency of agricultural producers.”

According to Deputy Minister of Agriculture Oksana Lut, producers from 79 regions took part in the competition. “I hope that next year all regions will join it,” she said.

According to her, 508 brands were presented – both well-known to everyone and those that were learned about through the popular vote. More than 1 million people took part in the voting. As a result of the competition, 24 winners were named in 8 nominations. These are 24 flavors that Russia can be proud of.

The Ministry of Agriculture of the Russian Federation, which organized the first competition of regional brands “Tastes of Russia” this year, intends to implement a set of measures to promote the brands that have become its winners.