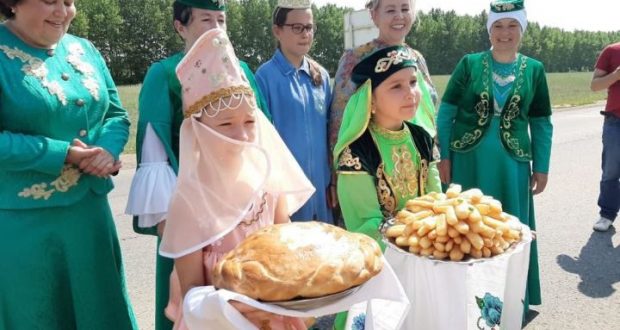 At the entrance to the Tetyushsky district, the guests were greeted by  head of the “Ak Kalfak” organization of the Tetyushsky district, Rimma Safiullova. The delegation included  director of the school, heads of kindergartens, teachers of the Tatar language, educators, museum workers, as well as Gulshat Sunkisheva, a relative of the famous writer Abdulla Alish.

It was a meeting that everyone remembered. Elmira Khanieva gave a master class on making and embroidery kalfak, and also presented them as a souvenir.

The historical sites of the Tetyushsky region are included in the tourist route. Travelers who have docked on the banks of the Volga are shown the story of Tetyushi in a theatrical performance.

Each exhibit in museums has its own value. The guests were delighted with the artistic merit of the Tatar national costumes. In this area, in the past centuries, the famous Russian-Tatar school worked. Iskhak Kazakov was its head. The teacher, writer Magrui Muzaffariya was born in the Tetyushsky district. It was here that an authoritative scientist was born, who at one time became the rector of Kazan University, Galim Kamai.

These lands are famous for their heroes. During archaeological excavations, the ancient stones of the mosque were also found. Local residents were engaged in fishing, breeding and timber processing. The fishery museum has been designed in accordance with modern requirements.

Also, in this area   there were the famous estates of the Molostovs. Natalya Ponedelnikova, the head of the Museum of the History of the Tetyushsky Region, told about everything in detail. The meeting was interesting, informative and useful. The guests were satisfied and grateful to the organizers.