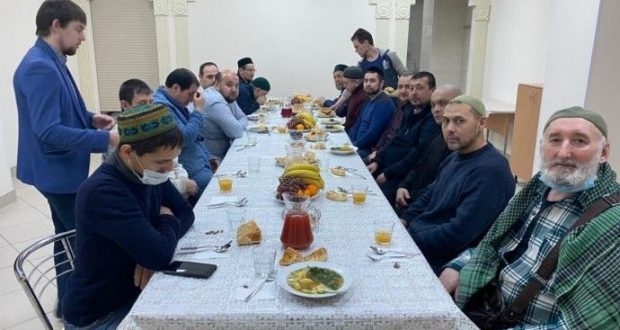 Representatives of the Tatar Autonomy of Moscow paid a friendly visit to the Kazan mosque “Bishbalta” and took part in the Mejlis.

The unusual name of the mosque, built in 2010 in the Admiralteyskaya Sloboda, is associated with the historical place where it is located.

Bishbalta in Tatar means five axes and reminds of the profession of the inhabitants of this area, surrounded by centuries-old pines and oaks.

The ancient Tatar village, founded during the Kazan Khanate, was famous for the art of boat making. In January 1718, by his decree, Peter I commanded “… to take service Murzas, Tatars, Mordovians and Chuvash without any payment for work on the felling and delivery of ship woods …”. After the Poltava victory, the war moved to the sea, for the construction of the fleet, forest was needed, which was so rich in the Kazan province.

The initiator of the use of non-Russians in this work was  head of the Kazan Forestry, since 1722 – the Admiralty Office of the Kazan Vice-Governor N. Kudryavtsev. He proceeded from the fact that the former service Tatars are the most suitable contingent for such work, since they are personally free, but at the same time they are not involved in any service. Therefore, they were most actively and most of all involved in logging.